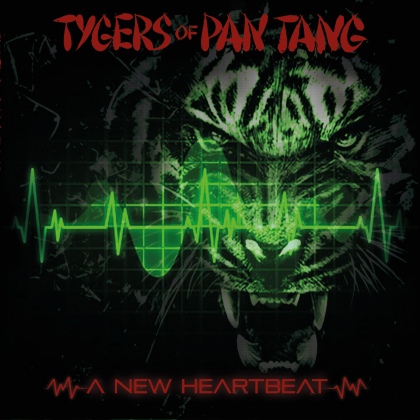 TYGERS OF PAN TANG will forever be revered for being a part of the NWOBHM movement. In spite of a few periods of hiatus, including one that lasted 12 years, the English act has been carrying the torch since they formed in 1978. Tenacity is a core facet that binds and propels any band that stands the test of time, and it served the Whitley Bay band well during the pandemic and related lockdown. The collective made the most of its downtime by recruiting new guitarist Francesco Marras and bassist Huw Holding. They also wrote and demoed their next album, in addition to creating this new, four-track EP, "A New Heartbeat". Perhaps not essential for longtime devotees, it's certainly one that's enjoyable for fans of the style and who value the old ways while appreciating modern hard rock and metal sensibilities.

The new EP includes two re-recorded tracks from their 1980 debut album, "Wild Cat", in addition to two new songs. The two tracks that overtly look to the past — "Killers" and "Fireclown" — somewhat capture the primitive and feral quality that ran through the band's veins so many years ago; however, the production aesthetic and execution are much more modern. With that said, the delivery doesn't seem robotic, and the sound isn't overly polished.

TYGERS OF PAN TANG aren't as wild as they were in the early days, and, unfortunately, a part of what made the unit so charming long ago has been lost. The EP starts off with the title track, a robust and energetic fistful of melodic, guitar-driven power that straddles the fence between classic heavy metal and a more contemporary take on hard rock. It's the kind of song that might appeal to fans of bands as varied as JUDAS PRIEST, RATT and DOKKEN. The other new song, "Red Mist", maintains that feel-good energy while introducing a slightly more grimacing quality.

Sure, some purists may scoff since Robb Weir is the band's only remaining original member. But the makeup of long-running bands obviously changes more often than not. Incorporating the spirit of their earliest of days, "A New Heartbeat" proves that this classic band isn't scared of infusing new blood and new ideas in to keep their signature style of heavy metal / hard rock exciting and challenging. The new EP is pleasing and suggests that the next album has plenty of fat that's worth chewing upon.