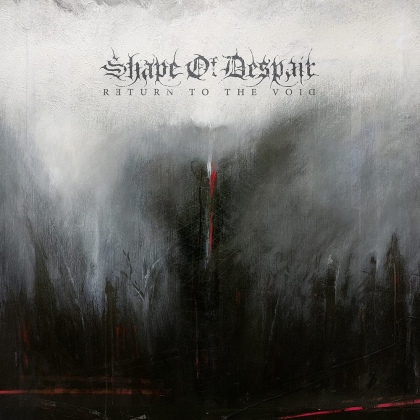 Return To The Void

All good things come to those who wait, death included. SHAPE OF DESPAIR have been plumbing the harrowing depths of mortal despair for a long time now, and while nothing can truly thwart the inevitable, the Finns' music has long provided fans of slow, emotionally ruinous music with the perfect soundtrack for surrendering to oblivion. In fact, the band's last album, "Monotony Fields" (2015),was so magnificently immersive and morose that it felt like a definitive and un(s)toppable declaration of funeral doom prowess. Unquestionably the subgenre's most potent exponents, SHAPE OF DESPAIR are enigmas with pedigree.

Never a band to rush things, the Finns have been silent for nearly seven years, and so "Return To The Void" feels momentous: the reawakening of slumbering gods, primed to document the crushing ills of the modern world. Self-produced, it also sounds every bit as huge as its predecessor, but warmer and more organic, and with greater space for Natalie Koskinen's unerringly ethereal vocals to cast their spell.

In essence, of course, the SHAPE OF DESPAIR sound has barely changed since 2000's release of "Shades Of…". But the weight of all that passing time has added depth to the formula, and with recent world events making notions of death, loss and mortality ever more pertinent, "Return To The Void" feels timely, important and emotionally enriching in a way that even this band's previous albums couldn't summon. The opening title track is as glacial and despondent as regular listeners will be expecting, but a combination of Koskinen's enhanced presence and the sheer, visceral rush of the guitars' glowering wall of sound ensures that each overwhelming wave of bitter melody reaches its target. Somehow, "Dissolution" and "Solitary Downfall" are even more absorbing, as the pace slows and the Finns' trademark cocoon of reverb starts to allow small bursts of light to filter through. "Solitary Downfall" is particularly devastating: 11 minutes deep, it slowly mutates from excoriating funeral march to beatific and surreal hymn to shattered hopes, all enshrouded in a glistening web of angelic but austere vocal harmonies. "Reflection In Slow Time" is a mournful and majestic thing, with vocalist Henri Koivula's abyssal growls woven through another icy, monochrome barrage; "Forfeit" feels like one sustained, shape-shifting crescendo of opaque dismay, with soothing swathes of synth and the most languorous of melodic hooks.

Music this heavy is rarely designed as a meditative tool, but SHAPE OF DESPAIR's rambling dirges are so naturalistic and free-flowing that "Return To The Void" is laudable as much for its transportive, dreamlike qualities, as it is for being thoroughly fucking miserable. This is avowedly dark music, hewn from human vulnerability and the vastness of the unknown, but infused with such artful humanity and emotional honesty that, as with everything else this band have produced, "Return To The Void" is vastly more uplifting and reassuring than funeral doom's reputation might suggest. Either way, nobody does it better than SHAPE OF DESPAIR, and this is all the proof your ears (and heart) need.