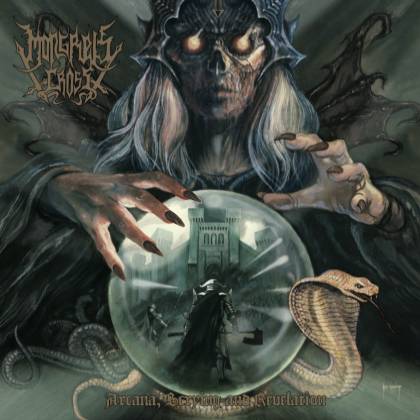 There has long been something unique about the way Australians make metal music. Particularly over the last 20 years, the power and fury of Aussie death and black metal has grown exponentially, and MONGREL'S CROSS are surfing that creative wave with abandon on their third full-length. You can certainly detect the spirit of frenzied brutality that has informed fellow countrymen like GOSPEL OF THE HORNS and DESTROYER 666. But this Brisbane quartet have evolved a great deal since 2018's "Psalter of the Royal Dragon Court", and it is a refined grasp of metal's melodic power that has emerged from that developmental process. "Arcana, Scrying and Revelation" stands proudly at the midpoint between metal's black, death and old school, with a frequently majestic approach to hammering home those harmony-fueled hooks. Opener "Suffer the Witch to Live" is, to a great extent, a pure-blood heavy metal song, but there's an underlying weirdness and a sense of barbaric intensity here too, all enhanced by the sound of a truly united and locked-in musical unit. "Fate of the Grail Pt. I" begins with a cascade of melody across some pitiless blasts, before the filthiest of thrash riffs takes over: again, it's a stunning combination of filthy, under-the-radar aggression and a big, bold and traditional aesthetic. Put more simply, this entire album rips like a two-mile stretch of bloodstained Velcro.

"A Magician's Prayer" is another near-perfect example of the band's formidable collective state of mind. Vocalist Proscriptor's (ABSU) virulent rasp is an unhinged focal point, as the Aussies conjure the otherworldly crackle of hell's flames, via a series of epic and stirring riffs that owe a little to IMMORTAL's grand, frosty vision, but filtered through that inimitable Australian hell-prism. "Fate of the Grail Pt. II" repeats the trick, and unless your enthusiasm for heavy metal is somehow equivocal, it will become impossible not to throw a claw or punch in the air while listening to this stuff.

The album reaches an exhilarating peak of potency on the merciless "What the Cards May Tell", which sounds like some mutant hybrid of old-school thrash and warped and windswept pagan metal, replete with folk-tinged themes and more blissful harmonies. Meanwhile, the closing "The Whispering Void" lets the band's MAIDEN fantasies run wild, as MONGREL'S CROSS's inherent nastiness collides with some authentic, balls-to-the-wall bombast. The past, present and future of Antipodean extremity would appear to be in exceptionally talented, if somewhat murderous, hands.