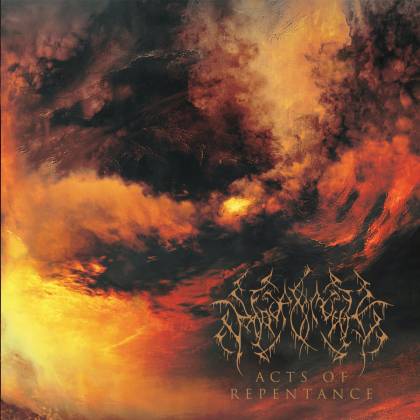 With tens of thousands of bands creating hundreds of thousands of hours of face-melting black and death metal, it's not beyond the realms of possibility that many of us are becoming desensitized. In the non-metal world, or what's left of it at this point, most people would shit their pants if they heard KILLSWITCH ENGAGE, let alone anything more extreme, so it really is all relative. But we are victims of our own tastes, folks, and the quest to find the next band that will truly make you want to drive your car through a series of brick walls is a never-ending one. And that's where WARDAEMONIC come in. Australia has produced plenty of bands in a malevolent vein over the years, and if you're not jamming the likes of CEMETERY URN, GOSPEL OF THE HORNS and ABOMINATOR on a regular basis, then you're simply not doing this thing properly, but even by those uniquely Antipodean standards of bludgeoning fury, "Acts of Repentance" immediately stands out as one of the most untamed and vicious records to be released in years.

This is pure black metal at heart, underpinned by an omnipresent microtonal whir of malice and propelled by blastbeats that seem to fold in on themselves through sheer force and velocity. Opener "Act I – Introspection" has many changes of pace and rhythmic focus, but the overwhelming impression is of a band locked in some infernal sprint to the edge of the abyss, enthralled by their own warped riffing and in a permanent state of churning rage. "Act II – Admission" is even more punishing; a heads-down blur of blasts and roars, it pulls off the neat trick of sounding redolent of both gonzoid, atonal war metal and epic, symphonic black metal with a doomy streak. WARDAEMONIC may not be doing anything radically original here, but they're doing it with levels of intensity that are all too rare.

If 2020 produces a more pulverizing 12-minutes of music than "Act III – Castigation", then I'm sure we're all very much here for it. But until that moment, it's an audacious act of epic savagery that reveals hidden, doom-laden depths and a dash of progressive intuition in the Aussies' otherwise streamlined and stoic formula. The remaining tracks, as you might hope, are every bit as unforgiving and unstoppable and, unusually, pretty damn memorable too. The faint-hearted should look elsewhere, of course, but if you fancy being skillfully eviscerated by Satan's scalpel, WARDAEMONIC have you covered.