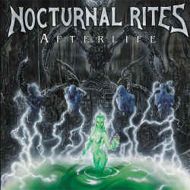 One of the most pleasant surprises of the year. NOCTURNAL RITES' fourth studio album is a virtual power metal masterpiece, featuring 10 songs of classy, melodic hard rock that can best be described as a cross between the Tony Martin-era BLACK SABBATH and early HELOWEEN. The bulk of the improvement can be attributed directly to the addition of new vocalist Jonny Lindqvist, whose ballsy, soulful delivery is infinitely superior to the thin, high-pitched wailings of his predecessor (Anders Zackrisson),with a tone that at times bears an uncanny resemblance to that of former YNGWIE MALMSTEEN / ABSTRAKT ALGEBRA / TREAT singer Mats Leven. A huge leap forward has also been recorded in the quality of the overall songwriting, featuring a sound that is rich in dynamics and filled with hooks, as is clearly evident in tracks like "The Devil's Child", "The Sign" and "The Sinners Cross", three of the album's most memorable and thoroughly brilliant moments.

If NOCTURNAL RITES can be faulted for anything, it is their reliance on a sound and style that has been tried and tested countless times before, focusing exclusively on an approach that offers little in the way of originality or stylistical innovation. Despite this, the group's incredibly powerful execution and undeniable songwriting skills are clearly a step above those of most of their counterparts (i.e. HAMMERFALL, GAMMA RAY, HELLOWEEN, STRATOVARIUS),and if justice prevails, Afterlife's commercial success will come close to matching the immense wealth of talent emanating from what is undoubtedly one of the best new traditional metal bands to have emerged in the last few years.