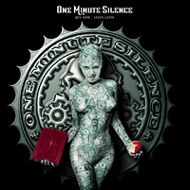 Arguably the UK's best hope of contributing a worthy homegrown act to the current hip hop/metal explosion, ONE MINUTE SILENCE have already done a fair bit of touring Stateside, where they've only had limited commercial success thus far. Dubbed by some a "more aggressive RAGE AGAINST THE MACHINE", OMS' sophomore effort basically picks up where the debut (1998's Available In All Colors) left off, with a thicker production and a stronger batch of tunes than the last time around. To the group's credit, there is no evidence that they've adopted any of the KORN-isms or BIZKIT-isms that are running so rampant in the US rock scene, but have instead been working on solidifying their sound, with RATM still standing as the most obvious reference point (due in no small part to vocalist Barry's Zack de la Rocha-like delivery). Unfortunately, there just still aren't a whole lot of very memorable hooks on here, and the band's angst-driven approach gets tiresome rather quickly, ultimately making for a less than exciting listening experience.