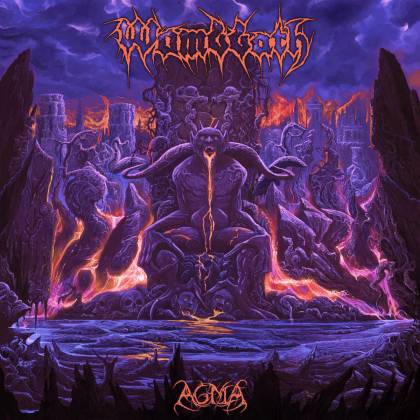 It may only be those who sleep with an HM-2 pedal under their pillow who noticed, but WOMBBATH delivered one of the all-time great comeback records with "Downfall Rising" in 2015. A mere six years later, the Swedish death metal veterans are delivering their fifth post-return full-length, and it is by far the most ambitious and adventurous record to ever bear the band's name. Given that they released two albums in 2020 ("Choirs of the Fallen" and "Tales of Madness"),it seems that WOMBBATH have hit a rich vein of inspiration and are now going for broke, both in terms of quality and quantity. That rare beast, the death metal double album, "Agma" is no old-school nostalgia-fest, instead, this is what happens when a classic sound gets a giant, eyeball-dislodging kick up the arse.

If it's unabashed ENTOMBED and DISMEMBER worship you want, then this may not be the record to sate your appetites. WOMBBATH certainly owe a huge debt to that seminal sound, and there is never any doubt that we are listening to punky and vicious Swedish death metal throughout these 73 destructive minutes. But the sheer versatility and variety on display here is genuinely breathtaking, as every song seems to represent another subtly skewed take on that cherished formula, with unexpected but always apposite curveballs raining down from all angles. "Agma" sounds considerably heavier and sharper than any previous WOMBBATH record, too. From the rampaging opening seconds of "The Law Of Everything" onwards, the authoritative weight behind these songs is obvious. Frontman Jonny Pettersson (also a member of MASSACRE, BERZERKER LEGION and countless other ongoing projects) has one of those archetypal, leathery death metal growls that always cuts through the noise, and founder/guitarist Håkan Stuvemark's riffing is truly inventive; his songwriting chops, increasingly imperious.

There are 16 songs here, and not a weakling among them. On a first, increasingly breathless deep dive, obvious standouts include "At The Giant's Feet", which manages to be equally snotty and technically dazzling, and "The Age Of Death", which weaves progressive textures and swathes of twilit macabre through WOMBBATH's hulking battery. But this is an album that delivers many powerful moments and demands repeat listens, all while nobly adhering to a none-more-true death metal ethos. From the sinister, death doom machinations of "In Decay They Shall All Fester" to the skull-caving D-beats and blackened discord of "Inquisition Reborn", this is a remarkable show of strength from a band with vastly more to say and do than the majority of their peers. Releasing it on New Year's Eve is a slightly bizarre move, but music this great will even cut through a Christmas hangover.