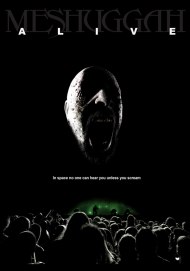 "In space no one can hear you unless you scream", reads the subtitle of MESHUGGAH's first official DVD, "space" being the operative word, as the Swedish enigmas are not of this earth. "Alive" is the sound of an alien invasion. Love 'em or hate 'em, MESHUGGAH was, is, and continues to be a unique entity in the world of metal. Rare is the band that can come close to matching the artistic devotion to its craft inherent in the ethos of MESHUGGAH, nor the intensity of its performance, the latter especially evident on "Alive".

You've no doubt heard from friends, acquaintances, and annoyances how imperative it is that you see a MESHUGGAH live performance, and you're never quite sure whether what you're hearing is truth or fan-boy propaganda. Put those doubts to rest; it ain't propaganda. Even more amazing than MESHUGGAH's brand of tripped out polyrhythms, down-tuned, mechanized bludgeon, and oddly suitable, extraterrestrial leads (hey, you try describing it!) is how amazingly well it translates live. On "Alive", the storied act performs 12 songs taken from shows in Tokyo, Toronto, Montreal, and New York City (one song, "Bleed"),several of which appear on 2008's "ObZen", that collectively seem like a single flawless gig, thanks to the superb editing of director/producer Ian McFarland. Weaving those performances together in such a continuous manner is even more impressive, given that interspersed throughout are relatively brief interview segments from the members, most of which are taken from commentary by drummer Tomas Haake and guitarist Mårten Hagström. The songs are played with a perfection that belies their innate studio complexity. Everything from the lighting to the recording is excellent and further accentuates the kind of hypnotic effect the otherwise jarring compositions can have on the viewer/listener.

Rather than trying to cram a comprehensive documentary into those interview segments, the discussions are succinct and focus on the band's essence, allowing a degree of informative discourse that doesn't distract from the flow of the live footage. Though the appetites of some fans may not be completely satisfied, there is freshness in the method in an era when DVDs are often produced in an everything-to-everyone fashion. The bonus material includes the making of the video for "Bleed", and segments called "Micha's Guitar Tour" and "Tomas Haake's Drum Tour", which are tailor made for the gear heads. A bonus live CD is also included for those desirous of alternative sonic mediums. With the possible exception of the insatiable completists, "Alive" will be welcomed with open arms by those that have waited for the MESHUGGAH live experience to be brought into the comforts of their own homes, otherwise known as a close encounter of the fourth kind.