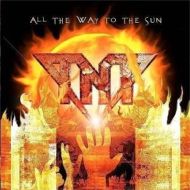 All the Way to the Sun

Norwegian-American band TNT have been proudly flying the flag of melodic hard rock for over 20 years (including a "break" before the 2002 reunion) and 2005 sees the release of the band's eight studio disc, "All The Way to the Sun". It seems I have probably encountered the band's music at some point over the last 20 years, but I sure as hell don't remember any of it. Be that as it may, "All the Way to the Sun" is, for the most part, a nicely written collection of slick, melody-driven, often '80s style, rock tunes. It is not intended for the rattleheads among us, but it is a pretty solid release that emphasizes good riffs and decent guitar soloing as much as it does pop-based song-craft.

An AOR and pop-metal fan's dream, one can hear at least shades of everything from bands like SURVIVOR and DOKKEN to EUROPE and the SCORPIONS' lighter moments. The odd '80s hair band moment is heard at as well. The title track is the album's best song, featuring a tough main riff and infectious melody, as well as a vague SLAUGHTER vibe in some of the vocal tones and patterns of Tony Harnell (no, it is not blatant…relax). Some of those same vocal parts show up in the mediocre "Save Your Love" as well. And this is a ROCK band, so there is much to grab hold off riff-wise on catchy songs like "A Fix" (sounds like an old DOKKEN riff) and the EUROPE-ish "Too Late". Listening to "Driving" I'm thinking of something that FIREHOUSE might do. Oddly enough, the main riff on "Black Butterfly" reminds me a bit of LED ZEPPELIN's "Immigrant Song", though only in a very vague sense (hey, it's there I tell ya!). While "Me and I" is tuneful, the lyrics and chorus made me grimace in pain. "Some Times" is just way to cliché (even with the BEATLES-esque bits). The band's version of LOUIS ARMSTRONG's "What a Wonderful World" comes of better than I would have expected, but because the song has been covered to death it is difficult not to skip over this one.

By now you know if TNT is your kind of band or not. "All the Way to the Sun" is not the type of album I would typically spin, but I can easily appreciate the group's mastery of its craft. There should be plenty to enjoy here for fans of the poppier end of the hard rock spectrum.