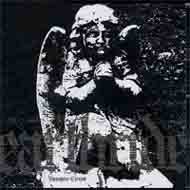 The tremors of a giant, throbbing bass guitar send worms slithering to safety above ground as a hot 'n' bluesy doom riff and a steady drum beat introduce the Lemmy-esque bourbon vocals of a man called Sherm. It is EARTHRIDE's second full-length release, "Vampire Circus", and it smokes like an oil fire and stings like a double shot of pure grain alcohol. Show me a better combination of doomy low end and slow-burn rock and I'll show you a…well, I'm not sure what I'll show you. The point is that "Vampire Circus" is all hot coals and cold filth, and goddamnit, these boys know how to pen a wicked collection of tunes.

Mike Dean's (CORROSION OF CONFORMITY) production gives the album a live feel, like you're sitting in front of the band's stack of amps as the music plays. Speaking of COC, there's even a slow, tripped out song called "Loss" that had me thinking of Pepper Keenan during the croaky parts. It is one serious blues jam; both bass and six-string get to wailing and all I can think to say is, "hot shit!" And folks, it's not the only time those two words fell from my lips. "Understand" and "God's Own Medicine" are just great tunes and both have hooks, grimy ones, but hooks nonetheless. The title track kicks into a sweet up-tempo section around the five-minute mark, then shifts back to plod mode…and the guitar solo just keeps going and going. Beyond the obvious vocal comparisons, "In the World I Live" is a rollin' ball of SABBATH and (old-school) MOTÖRHEAD, done EARTHRIDE style. "For Wrath and Ruin" is more along the lines of a song called "Grip the Wheel", which the band contributed to the "Doom Capital" compilation — i.e., more up-tempo compared to the rest. The Hammond organ parts contributed by CLUTCH's Mick Schauer to "Dirtnap" and "Swamp Witch" sound fantastic.

EARTHRIDE has mastered the art of the speaker-blowing blues groove, and to these ears only bands like CLUTCH can hold a candle to it. Doomed up, loud, and stinking of a three-day binge, "Vampire Circus" is about as real as it gets.