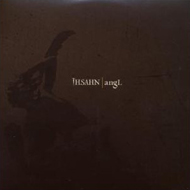 It seems that the blood left on the stage from last year's EMPEROR reunion tour has barely dried and already we're blessed with new material from the legendary act's equally legendary frontman Ihsahn. After 2006 brought us our first taste of what this metallic maestro is capable of when left to his own devices in the form of "The Adversary", the metal world rejoiced. To follow-up such a well-written piece of work would seem a daunting task for just about anyone, but then again Ihsahn isn't just anyone.

The logical continuation to "The Adversary", "angL" sees Ihsahn progressing further into new territory while also re-embracing his blackened past. Ihsahn's use of unconventional riffs laid out in a somewhat conventional structure makes "angL" a more focused effort, where songwriting is concerned, than its predecessor. Not that this has a single hint of commercialism or shows any signs that the frontman is losing his edge, but it does seem that he already knew his way around this unexplored terrain before arriving. Utilizing the drumming talents of SPIRAL ARCHITECT skinsman Asgeir Mickleson again, Ihsahn also welcomes Lars Norberg (from SPIRAL ARCHITECT as well) into the fold to handle bass duties; allowing himself to concentrate on guitars, keys and vocals. OPETH's Mikael Åkerfeldt makes an appearance on the haunting, Euro-doom tune, "Unhealer". The trade-off between bright acoustic passages, oppressively heavy guitars and proggy time signature warps gives the song a bit of an OPETH flavor, but the collaboration between these two artists spawns something that stands apart from either's normal ventures. EMPEROR fans are given their fix of blackened fury with "Malediction", which boasts some of the most memorable lead guitar work on the album. The aggressive opener "Misanthrope" is another example of Ihsahn revisiting the extremity of his past. Neither tune is a complete return to EMPEROR form, but there are definite elements heard on both.

It almost goes without saying that Ihsahn can deliver the goods when it comes to speed-addled fury, but his mark as a true artist is made when he pushes his craft beyond all preconceived limits. The Egyptian-influenced prog of "Scarab", with unexpected acoustic breaks, morose piano and emotional clean vocals is one testament to Ihsahn's skill as a songwriter. Morbid, yet melodic tracks like "Elevator", despite an anti-climactic ending, and "Emancipation", or the stripped-down ballad "Threnody" are other standouts.

After spending quite a bit of time with "angL", I found it difficult to pinpoint many flaws in songwriting, performance or production. There are a few moments here and there that tend to drag themselves out a bit and others might have wandered a bit too far from the path, but ultimately "angL" is a stellar record. It's not that often that an artist can produce a piece of work that challenges the mind, stirs the soil and boil the blood such as Ihsahn has done with "angL".