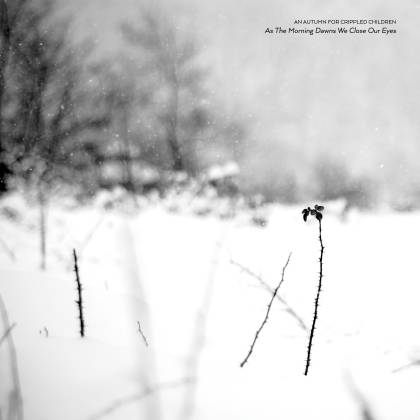 AN AUTUMN FOR CRIPPLED CHILDREN

As The Morning Dawns We Close Our Eyes

1. Carefully Breathing
2. Of Your Light
3. In Winter
4. Splendour Unnoticed
5. As The Morning Dawns We Close Our Eyes
6. Hearts Closed
7. Melancholia
8. Last Night I Believed in You

The genre tag blackgaze is not quite as high profile as it was a few years ago when DEAFHEAVEN were at their peak. The amount of practitioners of the sound, which marries black metal elements with gorgeous shoegaze atmospherics, remains vast though, and while the pathways to larger acceptance remain a bit tightened in the wake of its more well-known acts keeping a lower profile recently, the overall aesthetic remains vibrant thanks to acts such as AN AUTUMN FOR CRIPPLED CHILDREN. The Dutch trio has managed to keep an aura of mystery around their membership since the release of their 2010 full-length debut, "Lost", and the lack of concerts since the spring of 2020 didn't affect them as they have yet to perform live. Despite that relatively low-profile existence, the band has continued to refine their sound up to and including their latest, and ninth, album, "As The Morning Dawns We Close Our Eyes".

Their fairly well-defined sound is a hypnotic mix of wintry discordant sounds and beautifully melodic guitars and keyboards. Each album has had minor tweaks, but as time has passed, AN AUTUMN FOR CRIPPLED CHILDREN has inched their way closer to embodying the platonic ideal of the blackgaze sound. "As The Morning Dawns We Close Our Eyes" is the culmination of those steps forward, as the trio's a well-oiled machine with a veteran presence.

The album launches straight into "Carefully Breathing"'s melody. The song's a galloping mid-tempo rocker that is lifted by a balance of warm guitar riffs and caustic screams from band leader Mchl and a phalanx of hypnotic sci-fi keyboards from him, bassist Td, and drummer Chr, who juggle those duties alongside their other instrumentation. The track shows how expertly the group walks the tightrope of generating a sound that is "spacey" without falling into space-rock and coloring within the lines of their chosen genre. This trend continues into "Of Your Light", which on the surface initially appears to be the closest analogue to a DEAFHEAVEN song on the record, though as it continues the layers of keyboards and Td's warm bass lines cause the track to transform into its own dreamy beast. "In Winter" shows off the trio's mastery of escalation, starting off with a hypnotic drumbeat and lulling keyboards which eventually see the rest of the song fill out, combining those elements into a big crescendo. The remainder of the record follows the path established early on, encompassing the balance between emotional beauty, big riffs and keyboards, and tortured screams, with other highlights peppered within such as Chr's frenetic drumming performance on "Splendour Unnoticed".

The chemistry of the trio behind AN AUTUMN FOR CRIPPLED CHILDREN is undeniable at this stage as is their mastery of the "blackgaze" sound. Should the day come that they choose to show off their wares in a live concert setting, their ability to balance entrancing beauty with a metallic sound that is fit for a large room will serve them well.