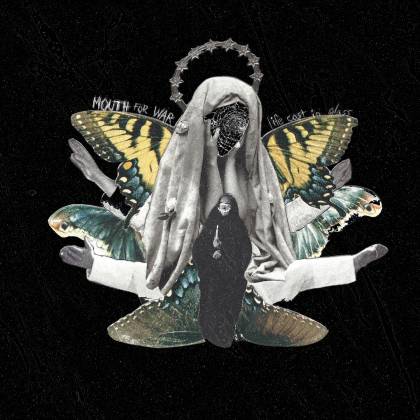 With so many grim distractions and not much touring in prospect for the foreseeable future, this is a weird time for new bands to be peddling their wares. Fortunately, MOUTH FOR WAR are far too pissed off and bellicose to be concerned with anything other than smashing everybody to pieces with giant riffs. The core of this Colorado crew's sound is brutish and ignorant metallic hardcore, custom designed to get heads nodding and circle pits swirling. Yes, they're named after a PANTERA song, and there are certainly a few traces of that band's unassailable sound lurking here, but "Life Cast In Glass" is far too direct and focused to owe too much to anyone else. Songs like opener "Shape In The Dark" and "I Don't Want To Feel At All" exist to pulverize: the riffs are simple but destructive, energy levels are firmly in the red and vocalist Trae Roberts frequently sounds like he's about to experience a burst eyeball. Likewise, "Manifesting You" and "Fear Is The Product" are unapologetic pit fodder, with plenty of infectious HATEBREED-like grooves and limb-threatening breakdowns.

MOUTH FOR WAR have more imagination than their most straightforward songs might suggest, however. "Take My Place" dares to stray into more melodic territory, interspersing the band's fidgeting, hammer-blow syncopation with glimmers of melancholy and "Selfish" is grim and grubby, with a gnarly, death metal undertow; "Slave To Your Ghost" re-harnesses the sledgehammer hostility of classic hardcore, with waves of exhilarating punk velocity and another satisfyingly bug-eyed vocal from Roberts.

These are definitely times for simple pleasures. Subtlety can wait. MOUTH FOR WAR go straight for the jugular for 29 straight minutes here, with no shortage of smart ideas and, more importantly, a handful of riffs that will make you want to run through a brick wall. Massive potential, massive riffs.