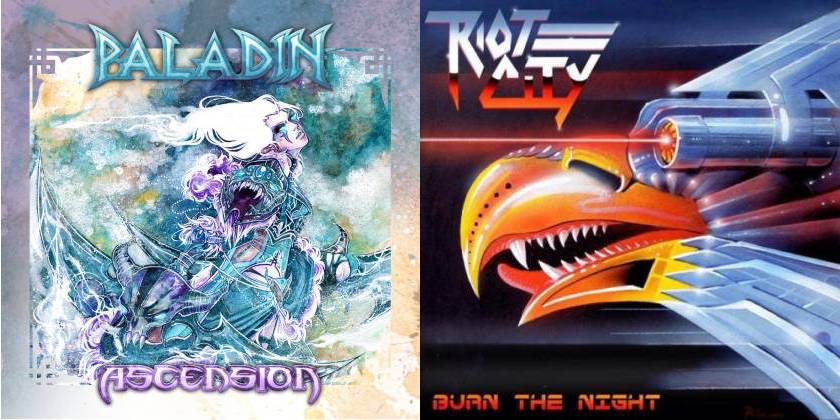 The way the mainstream rock and metal media talk about so-called old-school heavy metal these days, you could be forgiven for thinking that the genre was little more than a redundant anachronism, at this point pleasing only middle-aged Germans and Brian Slagel. It certainly doesn't help that the majority of bands peddling traditional metal, power metal or any number of plausible variants tend to be from older generations, and that young bands with a convincing grasp of the old school have been in relatively scant supply in recent times. Yes, there are legions of sepia-tinted NWOBHM copyists, all determined to keep metal in mothballs for no good reason, but if I wanted to listen to something that sounds like 1981, I'll listen to "Killers", thanks very much. What the world really needs right now are fiery, fresh and defiantly balls-out heavy metal bands like PALADIN and RIOT CITY. The fightback starts here, folks.

PALADIN are from Atlanta, Georgia, and sound like a successful attempt to create the ultimate hybrid of old-school melodicism and new-school crunch. CHILDREN OF BODOM's influence is undeniable as the opening histrionics of "Awakening" erupt, but this band have a huge number of cool and exhilarating things going on in their sound, from bursts of blasting death metal to gloriously syrupy power metal harmonizing. Elsewhere, you will hear the syncopated precision of David Lee Roth-era VAN HALEN in guitarist Taylor Washington's nimble showboating, as the irresistibly boisterous likes of "Carpe Diem" and "Shoot for the Sun" explode like a heavy metal carpet bombing campaign. Washington's vocal skills are not to be sniffed at, either: switching from scabrous roar to octave-shattering falsetto like an annoyingly talented man possessed, he injects such personality and urgency into every song that you may wonder how he manages it all without passing out from exhaustion. They may find that their biggest audiences are waiting on the other side of the Atlantic, but for now, PALADIN are just about the most exciting thing to happen in U.S. heavy metal in a long time.

Meanwhile, Calgary quartet RIOT CITY take a more primal and straightforward approach to honoring the greats. Three parts gritty speed metal attack to two parts DOKKEN sheen, the likes of "Livin' Fast" and the rabble-rousing title track sound like ready-made classics rather than lazy tributes. The whole thing spits and kicks with snotty exuberance, but the production is glossy and powerful, too: the best of both worlds, then, with vocalist Cale Savy's piercing howl, a particularly startling bonus. At their best on the edgy grandeur of "The Hunter" and the shit-kicking fury of "Steel Rider", RIOT CITY may occasionally sound like a band beamed here from the late '80s, but strong, memorable songs and dizzying energy levels make "Burn the Night" feel far more relevant and compelling than even its creators have anticipated. Most importantly, despite what you may have heard, heavy metal is alive and well and gathering its forces for another onslaught. We're here for the long haul, aren't we?