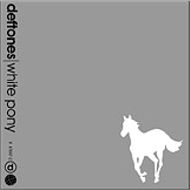 One of the most heavily anticipated released of 2000 has turned out to be a bit of a disappointment, with most of the cuts featuring a more restrained, melodic musical direction and an increased emphasis on Chino Moreno's one-dimensional singing voice, which has never sounded quite as flat as it does here. While Chino has always had a fairly unique vocal approach, he has consistently failed to live up to his full potential due to his obvious lack of creativity, and this is nowhere more evident than in the otherwise excellent "Passenger", where Moreno is competely upstaged by the guesting TOOL/A PERFECT CIRCLE frontman Maynard Keenan, whose performance on this track is simply breathtaking.

In musical terms, DEFTONES are still unlike anyone else out there right now, and there are quite a few moments where the group manage to stir up an intensely powerful groove, such as in "Elite" and "Korea", two of the hardest tracks on the CD. Unfortunately, much of the rest of the album tends to drag on uneventfully, and without the aid of memorable vocal hooks, it grows tiresome rather quickly.

At their best, DEFTONES are capable of producing some of the best and moodiest cutting-edge heavy rock that we have heard in years. White Pony, however, simply lacks the fire and energy that made the group's earlier efforts so exciting, and as such, it is unlikely to bring DEFTONES any closer to the multi-platinum commercial success enjoyed by many of their counterparts.