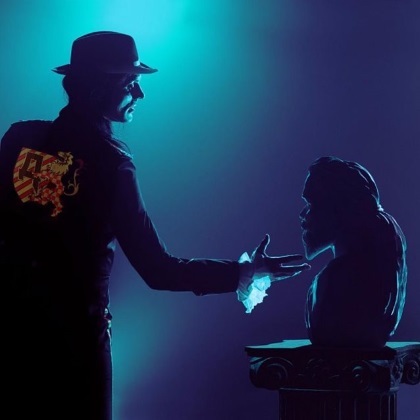 There are endless examples of metal artists taking themselves far too seriously. AVATAR is not one of those bands. The Gothenburg-based band's intentionally and ridiculously over-the-top brand of heavy metal continues to run through its latest, and seventh overall, full-length release: "Avatar Country". Sonically, the Swedish group has streamlined its already accessible heavy metal crunch into something that has the potential to reach into pop cultural consciousness. True to its flamboyant nature and the release's title, AVATAR unravels a theme placing the band as the centerpiece of a land and people. The group wastes no time in highlighting this playful theme as it dives right in with "Glory To Our King", the “national anthem" of the domain within this tale.

Dramatic, charging metal immediately follows with "Legend of The King", bursting forth with DRAGONFORCE-esque soloing in a contemporary take on power metal. The track is eight minutes long, and it's fortunately diverse and interesting enough not to feel that way. AVATAR's musical fortitude is clearly evident with the very next song as well: "The King Welcomes You To Avatar Country". The song is up-beat modern pop-country that is no more inauthentic than the bulk of what that genre offers nowadays anyway, and it is infectious in spite of how nerdy it is. Then again, very little seems odd in a world—or, ahem, country—that this band would call home. The clap-along chorus is as catchy as it is goofy, and Johannes Eckerström flexes his pipes alike AC/DC's Brian Johnson at times standing in stark contrast from his soaring Warrel Dane-like delivery on the previous track. And that's before the aggressive nu metal styling of "King's Harvest" showcases his inner Corey Taylor marching in tandem with a fist-clenching riff that very well could have been pulled from a SLIPKNOT album.

AVATAR's career has blossomed as its allowed its adventurous spirit to wander. The unit is a far cry from the unremarkable melodic death metal band it initially was. Needless to say, AVATAR is no longer afraid of hopping, skipping and jumping in and out of musical styles. It doesn't do so within individual songs, instead, the group explores different kinds of music in disparate songs remaining relatively true to form to each style.

A concept album from a band known for its circus themed performances makes perfect sense. There's clearly a tongue-in-cheek aspect to the outlandish theatricality, yet AVATAR's version of what could have been a grandiose concept is as sophisticated as a five-year-old child's messy crayon drawing. The "Kings Speech", for instance, is an interlude of sorts during which a narrator translates the king's musings on such profound matters as his enema and constipation. In spite of this, however, the music is much more enjoyable than the embarrassing narrative.

"Avatar Country" isn't as heavy as the act's previous efforts; it's more well-rounded and diverse. Simultaneously, AVATAR has become more efficient in making its points musically. The album's accessible aspects, including the more prominent melodies and hooks, suggest obvious potential for rock radio airplay. Only time will tell the extent to which the group will grow in terms of commercial success.