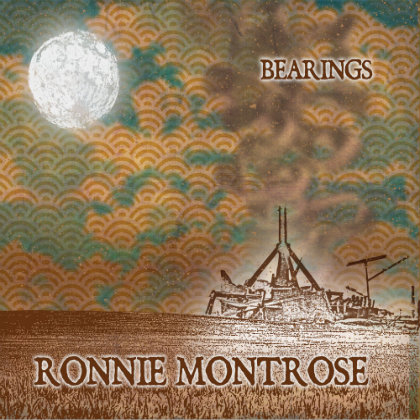 You often hear artists mention how, when all is said and done, the ultimate goal of their craft, be it audile or visual, is to leave their proverbial footprints upon Mother Earth. Before succumbing to prostate cancer in 2012, guitar legend Ronnie Montrose had well left his footprints behind. Ask his diehard fans; they know how to trail him.

In his own modest fashion, Montrose was a prolific musician best known for the band bearing his name. This, even if future hard rock personality Sammy Hagar was the principal reason people trekked back to the MONTROSE band in curiosity as heavy metal first grew in popularity. Also the mastermind behind GAMMA and a slew of solo records ranging from 1978 to 1999, Ronnie Montrose was frequently a behind-the-scenes guy during his career. He was a go-to session player who'd backed up the likes of Edgar Winter, Van Morrison, Boz Scaggs, Herbie Hancock, Gary Wright and tons of other artists. He even held the producer's chair for a handful of albums including WRATH's "Nothing to Fear", HEATHEN's "Break the Silence" and Y&T's "Unearthed, Vol. 2".

Almost two years after his passing, Montrose's final solo album, "Bearings", has been remastered, a fitting tribute to a lord of his trade. "Bearings" is a record of acoustic-driven instrumentals with Ronnie fielding the guitars, acoustic bass and mandolin along with a small handful of guests including Ed Roth on keys, former wife Michele Graybeal on percussion and C.J. Hutchins (for whom Ronnie had produced his "Out of These Hands" album) with second acoustic guitar on "Line of Reason".

"Bearings" is a gorgeous, often layered soundscape of desire, languor and even aspiration. The textures and moods vary to the brisk upswings of "Morning", "Lunarization" and "All Aboard" to sensuality on "Breathe Deep", "Solid Ground" and "She's Watching". Blues and jazz figure into a couple selections ("The Whole Truth", for example) and later in the album, Montrose weaves a sequential series of meditative tapestries. Not before listeners find themselves facing the fugue of "This is Only a Test" and the morose intro to "The Map is Not the Road", which hardly prepares them for the rest of the latter song's journey. Ronnie Montrose takes his audience on a fret sliding jaunt into the desert wastelands before reprising that song's intro at the end.

"Breathe Deep" is perhaps the most affective and sentimental piece on the album. It's hard not to believe Montrose and contemporary Mike Oldfield never pulled together a collaboration, but the melancholic caresses of "Breathe Deep" sounds like a gestation of both men's works. The song is sieved in stop-go calliope measures that gouge at the soul and claw for a love eternal that may or may not come to fruition. In some ways, it's ZEPPELIN-esque as it is within the realm of Oldfield's moody pastures, but it is beautiful work, granted extra loft by Ed Roth's ethereal synths. "Breathe Deep" connects to the equally romantic "Solid Ground" afterwards and later, the starry-eyed "Forever is Now".

At times, Ed Roth's synths and organs are so subdued they create a faint bass line you'll barely hear behind Ronnie Montrose's delicate plucks and strums. In other cases like "Three Wishes" and "Morning", Roth's up-front piano bars get equal billing as Ronnie himself, and the homogeneity between these guys is superb. Roth's organs on "Solid Ground" sets an alluring breeze to allow Ronnie to sprinkle notes galore in troubadour fashion. On "The Whole Truth", Roth's soulful organs are the whole reason you get a blues feeling as Montrose's rambling lines and tempered bass drive suggests barely-contained agitation in the key of rock.

As with Roth, Michele Graybeal's presence can be paper thin on the album, but she bluntly accents the quick strumming of her husband on "All Aboard" with her brisk, if turned down bongos. Michele is most prominent on the dusty sprawl of "The Map is Not the Road", and she keeps an earthbound consistency to the piece.

Toward the end of "Bearings", Ronnie Montrose creates a cozy sense of coming-home, beginning with his amicable square-off with C.J. Hutchins on "Line of Reason", followed by the sweet innocence radiating through "Lighthouse" and the twinkling closing number, "Soul Repair". "Soul Repair" is as much Ed Roth's show as Ronnie Montrose's with his elegant piano tides that pirouette beneath Montrose's rolling progressions.

If there ever was such a thing as leaving behind one's footprints with music, Ronnie Montrose's stamp is assuredly out there, cast amidst the transcendent and introspective "Bearings".