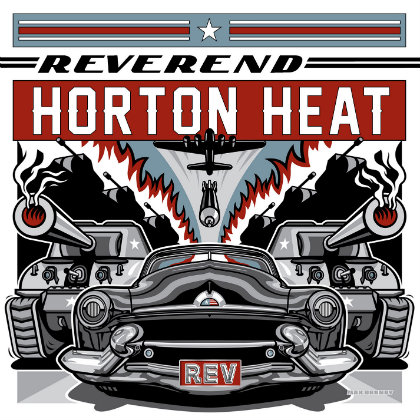 Now that the brief psychobilly rampage through the punk underground has quieted down like another here-and-almost-gone fad, it's mostly down to the main core of veteran bass-slappin' happies likes NEKROMANTIX, BATMOBILE and the original Psychobilly Freakout himself, Reverend Horton Heat. Resurrecting another fad from way long gone, Reverend Horton Heat's got button beanies for sale if you jet on over to his website. What's a button beanie, you might ask? Look it up (or by its other term "whoopee cap"),but if you think of Jughead from the Archie comics, you're heading in the right direction. Why not? It's hardly as nutty-retro as the femme fatale army of tatted-up Betty Page clones that have romped through the punk and fetish circles.

Victory Records, who have been making some interesting strategic changes to their roster, comes up with probably their oddest signing yet with Reverend Horton Heat, but thank God for that. We can never get enough big red rockets of love, wiggle sticks and martinis to fill our hepcat ears, nor enough rockabilly interpretations of "What Child Is This" as found on Reverend Horton Heat's way-bitchin' Christmas album, "We Three Kings".

On their eleventh album and first in four years, "REV", Jim Heath, Jimbo Wallace and Scott Churilla (returning to the trio in 2012 after a six-year sabbatical) waste no time getting things started with the whirling instrumental "Victory Lap" that only gets faster after the first couple stanzas. The Rev jerks out all kinds of sicko note tugs as the velocity increases and "Victory Lap" transitions into the equally wild "Smell of Gasoline". As ever, Reverend Horton Heat takes the fast car ethos from fifties rock 'n roll and puts his own demented twist on it, whipping up a hilarious ditty about a teen girl from Heath's purported past with a speed addiction and a fixation on ethanol. Later in the album, he trumps the former with a low riding country vibe to match his roughneck muse on "Hardscrabble Woman".

"REV" is naturally split between speed demons ("Victory Lap", "Smell of Gasoline", and the riotous first single of the album, "Let Me Teach You How to Eat"),bop ("Spooky Boots") and straight-up Fifties rockers ("Never Gonna Stop It", "My Hat" and "Mad Mad Heart"). Of course, you get country bakes like "Longest Gonest Man" and punked-up mashes of the whole kit and caboodle like the tough-as-hell "Schizoid" and the brisk Texarkana twister, "Scenery Going By". Like Brian Setzer and Reverend Horton Heat have always done, there's a couple of obligatory (if tweaked) salutes to Bill Haley squeezed into "My Hat". There must be an addendum placed in the rock 'n roll bible that if you practice the old ways, you are to tribute Haley like a hosanna.

Heath even does a gnarly twist on surf with "Zombie Dumb", playing the thing in a slightly lower key but with plenty of Dick Dale-lovin' fret curls while Scott Churilla dumps out some tongue-in-cheek riptides. "Let Me Teach You How to Eat" is the breaknecking bastard spawn of "Eat Steak" from the "Smoke 'em if You Got 'em" album. You know as The Rev yaps about choking chickens, marinating meat and teaching how to shred and toast, it's a no-brainer he's got other things in mind than culinary arts.

On "Never Gonna Stop It", the hard slam of Scott Churilla's beat guides the song's primary message that pure rock 'n roll will always be, just as Danny and the Juniors prophesized decades ago. In the hands of Reverend Horton Heat, that's certainly a justifiable claim, even as rock 'n roll itself struggles to hold on against the reigning form of popular music, which is hardly rock 'n' roll.

As always, Jimbo Wallace is on-par with his contemporaries Lee Rocker and Kim Nekroman (he knocks his standup bass silly on "Never Gonna Stop It") and the return of Scott Churilla has a lot to do with the unending energy of "REV". Sure, bits of "REV" are reworked from older songs ("Chasing Rainbows" is a total overhaul of "Now, Right Now", for instance),but that's rock 'n roll at its purest. It's the heart and the pride, not the panache that matters, albeit Reverend Horton Heat has always carried plenty of panache to his playing. Still today the man is a grossly underrated guitar slinger. Jim Heath remains the best psychobilly polecat that ever lived and "REV" proves it without argument. If you don't believe it, watch these dudes play live and trip on the swing dancers from varying generations who take turns giving each other the floor.

Cheers to Victory Records for taking a chance on these guys and keeping the flag flying for the old ways, button beanie caps and all.