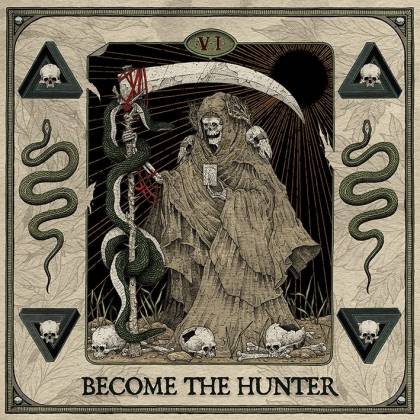 It's not hard to imagine that SUICIDE SILENCE's self-titled record from 2017 seemed like a good idea at the time, but there's no denying that it proved to be both a commercial and critical hiccup along the rock 'n' roll road. Not that the band needed to justify making a record they plainly wanted and needed to make, but "Become the Hunter" does suggest that whatever turmoil drove that divisive creative detour, it has since been replaced by the ferocious confidence of old. Although far from a wholesale return to the sound of "You Can't Stop Me" and "The Black Crown", these songs lurch, smash and slice with the same intensity that made SUICIDE SILENCE stand out in the first place. Not so much a comeback, then, but a reaffirmation of values. And, perhaps, a chance to shut everyone up.

In fact, there's a strong argument to be made that "Become the Hunter" feels like the perfect follow-up to "You Can't Stop Me": the textbook deathcore production and precise execution that made that record such a definitive statement (not least in light of the tragic death of vocalist Mitch Lucker and his replacement by Eddie Hermida) are here in spirit, but not delivery. Murderous intro "Meltdown" instantly hails a subtly new strain of SUICIDE SILENCE crunch, with some of the self-titled album's dirt still present in those guitar tones, but tons of that old SUFFOCATION-meets-KORN menace underpinning the attack. Opener proper, "Two Steps", is even more exciting, hopped up on blastbeats and slamming sludge, with Hermida back in his feral element, sounding more animalistic and unhinged than ever.

In fact, the whole band sound like they've been snorting steroid pills and wrestling with alligators. "Feel Alive" is brilliantly thuggish, a thudding caveman deathcore march with a hook to kill for; "Love Me to Death" is a multi-paced flurry of crazed threats and knucklehead beatdowns; "In Hiding" is just plain ugly, as machine-gun sludge collides with suppurating doom, in a shower of bloody sparks. Elsewhere, "Skin Tight" is an eerie serial-killer ritual, replete with a tour-de-force freak-out from Eddie Hermida and something approaching a sing-along chorus (albeit one about wearing someone else's skin, but you take what you can get!). The closing title track is a fine way to flick the kill switch, too: this is exactly the kind of rampaging, groove-powered extremity that changed the game 15 years or so ago, but served up by a band with the depth of experience and self-awareness to play to new strengths, as well as old.

There was always a risk that SUICIDE SILENCE would revert to former glories here, but it's the freshness of this record's sound and the innumerable tweaks that the band have made to their idiosyncratic formula that ensure that "Become the Hunter" is the triumph it desperately needed to be. This thing will kick your face off. In the end, that's all you need to know.