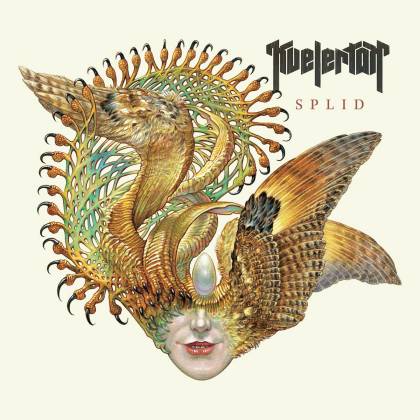 The introduction of a new vocalist into a band's established blueprint is always a daunting prospect, but especially so at the stage of their career that KVELERTAK is in. In the ten years since their 2010 self-titled breakthrough record, the Norwegian act has cultivated a diverse cross section of heavy music followers. They accomplished this by embedding catchy guitar hooks within a musical combination that was just hardcore punk enough for REFUSED fans, just metallic enough for thrash fans, and just technical enough for MASTODON fans. Erlend Hjelvik's energetic screams had been a critical part of that equation, his enthusiasm shining through despite their lyrics being fully in Norwegian up until this point.

New vocalist Ivar Nikolaisen does prove to be up to the task on KVELERTAK's latest record, "Splid". His screams don't quite have the same immediate urgency as Hjelvik's on initial listens, but those that sit down with the record will still find him more than capable of carrying the group's more aggressive tracks, while showing a little more versatility on the band's moodier, more ambitious tracks. Unfortunately, the band doesn't really rise to the occasion with strong material for Nikolaisen — and the listener — to sink his teeth into until the record's second half.

The hallmarks of KVELERTAK's sound do remain present throughout the first half of the record. Album opener "Rogaland" has infectious guitar work that matches some of the best moments from the band's previous efforts. "Necrosoft" launches with a furious burst of fast-paced thrash before settling in as a bruising rocker. "Crack of Doom" and "Discord" are both stabs at English-language crossover tracks that are energetic romps with catchy choruses. "Bråtebrann" features a rhythm riff that evokes Megaforce-era METALLICA while layering in a little bit of sleazy Southern rock swagger. The parts are there, but the sum of those parts still doesn't quite result in a compelling whole. A few of the early tracks end just as they seem to be getting really interesting, and while the first half of the record feels like a strong higher-end release from the Burning Heart Records catalog of the early '00s, there is a little bit of a "been there, done that" tedium.

Things do pick up though with "Fanden ta dette hull!" The band's more ambitious moments kick in, and they rise to the occasion with every momentum swing. The song starts with a hypnotic sped-up psych-rock riff, before taking a turn towards thrash and squealing shred guitars, all while Nikolaisen hits his fiercest screams on vocals, before the song settles into a slow-burning engaging coda. "Delirium Tremens" is another sprawling experience, with moodier riffs and a flood of shout-along choruses. Sandwiched in between those two efforts is the album's catchiest song, as the AOR riffs that power "Stevnemøte med Satan" would fit alongside "Jessie's Girl" on an early '80s FM radio rock playlist, though RICK SPRINGFIELD never screamed in Norwegian.

Ivar Nikolaisen impresses with his first outing as KVELERTAK's vocalist on "Splid". It's just frustrating that the band takes until the record's second half to truly give him his best showcases and show off their best musical output.