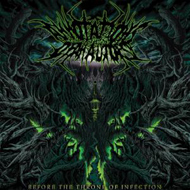 ANNOTATIONS OF AN AUTOPSY

01. Rise Of The Leviathan
02. Keeper Of The Plaguelands
03. Human Dust
04. Sludge City
05. The Childsnatcher
06. Prosthetic Erection
07. Years Of Disgust
08. Fisted To The Point Of Regurgitation
09. Deities
10. Before The Throne Of Infection

England's Siege of Amida Records seem to have a knack for discovering bands playing a vicious and modern strain of grindcore and death metal, as releases from DISKREET and WHITECHAPEL clearly demonstrate (both are distributed through Candlelight in the States). I can't praise "Before the Throne of Infection" by England's ANNOTATIONS OF AN AUTOPSY as highly as releases from the two aforementioned acts though. The down-tuned grindcore and death metal style, sprinkled with a little hardcore, can be rather skull cracking at times, but the songwriting is barely better than average.

For the most part, there is more good than bad on this release, yet nothing that leaves any lasting impressions. More death metal than grindcore, "Before the Throne of Infection" features a good deal of grinding/groovy riffs and patterns that often remind of SKINLESS, sans the New York band's superior writing abilities. Vocalist "Steve" does a workable job with his guttural growls and occasional variant on the pig squeal. Setting aside the brief album intro ("Rise of the Leviathan") and classy, but out of place, instrumental "The Childsnatcher", the eight formal tracks pack an OK punch. The exceptions are the ill fitting hardcore gang shouts tossed into "Sludge City" (with lovely line "She bled from every fucking hole"),"Keeper of the Plaguelands", and "Fisted to the Point of Regurgitation". I can appreciate the willingness to experiment and try to offer the listener something beyond standard DM, but the gang vocals just don't work very well. Though those sections become more tolerable with each spin of the disc, one never really gets completely used to them. The new wave of death metal that's been based on genre mixing features at least a few bands that pull it off fairly well (e.g. DESPISED ICON),just not this quintet.

What it comes down to is that gindcore and death metal fans should find some meat on the bone in consuming "Before the Throne of Infection", although the purists will more than likely be annoyed with the gang shouts. Nothing to outright hate, but nothing to love either.