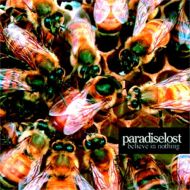 Much has been made of PARADISE LOST's supposed return to their roots on their eighth studio album following the group's critically-panned foray into the less guitar-heavy territories on the otherwise enjoyable Host release, with the band themselves describing the new CD as a far more "headbanging" effort than its predecessor. It is, therefore, disappointing to learn that Believe In Nothing is, at best, a more organic version of the aforementioned album, featuring a few genuinely heavy moments, but revolving largely around the same kind of bland vocal melodies a less-than-aggressive vibe that, over the course of a full-length record, start to significantly erode the effectiveness of the quintet's delivery.

At their best, PARADISE LOST are still capable of producing hauntingly dark moments that, despite their less guitar-driven nature, never verge on sounding overly "commercial" or tailor-made for radio, a point that serves in the band's favor against the numerous detractors who have dismissed the group's latest endeavors as an indication that the five-piece have "sold out". On the other hand, PARADISE LOST seem to have compromised their sense of dynamics through their most recent songwriting efforts, with the bulk of the tracks on the last two albums following a similar direction and featuring choruses that can often sound virtually indistinguishable from one another, a factor that is made worse through the group's decreased emphasis on guitar riffs and a general shift toward a more vocal-oriented approach.

Longtime fans of PARADISE LOST that appreciated the more experimental sounds of the group's Host release will find plenty to enjoy on the band's most recent offering. Others, however, would be well advised to spend their money elsewhere.