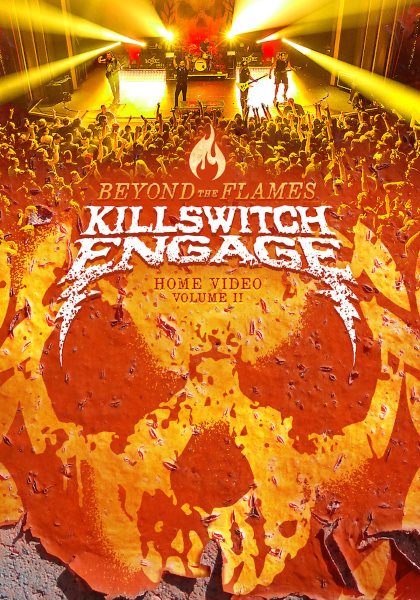 Though band disintegrations and member departures are commonplace, it's a rare thing when those who leave without a trace are not only offered a second shot, but take that shot as their moment of redemption.

KILLSWITCH ENGAGE is such a band. Not only one, but two singers have made their indelible marks and were suddenly on the outs, largely of their own accord. Original vocalist Jesse Leach abruptly left the band, fearing vocal degeneration, as well as becoming, in his own words, "a self-righteous, pompous asshole."

Leach left KILLSWITCH ENGAGE after the band broke out with 2002's "Alive or Just Breathing": leaving the band in a quandary. Enter Howard Jones and drummer Justin Foley during this transition, which led to 2004's commercially successful "The End of Heartache". While fans were largely receptive toward Jones's soulful and accessible vocal dynamics, by the time 2012 came around, he was carrying a huge question mark upon his back. Jones officially broke off when it was revealed he was battling Type II diabetes. Re-enter Jesse Leach.

"Beyond the Flames: Home Video Volume II" is a celebration of Leach's homecoming. The album garnered the band's second Grammy nomination for the single "In Due Time", from 2013's "Disarm the Descent". Following last year's well-received album "Incarnate", this video and audio package corrals a slew of recent Leach-led footage spanning his first show back at the Palladium in Worcester, Massachusetts, Download festival, Knotfest and Loud Park Japan. A CD containing the Palladium gig accompanies. Even more important, however, is the 75-minute band documentary, "Embracing the Journey".

The "Alive, Raw and Reunited" footage mingles color and black and white footage, and keeps true to the raw context. Sometimes the sound capture is meh. Sometimes Jesse Leach and Adam Dutkiewicz volley their vocals a bit too laxly, but there's no getting past the high-energy level of the songs.

As expected, there's a heavy lean on songs from "Alive or Just Breathing" such as "Numbered Days", "Self Revolution", "Fixation on the Darkness", "Vide Infra", "My Last Serenade" and "Temple from the Within". Having to field the Howard Jones-era, Jesse Leach's exuberance on "The End of Heartache", "Rose of Sharyn", "My Curse" and "The Arms of Sorrow" is palpable, if naturally rougher than Jones. Leach explains in the documentary portion he initially had qualms about taking on his predecessor's work, but out of necessity, he found what he jived with lyrically and thus makes them his own here. More recent KSE songs like "Alone I Stand", "Strength of the Mind", "The Hell in Me", "Beyond the Flames", "The New Awakening" and of course, "In Due Time" round out the live section.

Adam Dutkiewicz, a notorious stage goofball (a frat boy, as he would put it; a Tasmanian devil, according to his band mates) looks absolutely gonzo in his faux tux muscle tee, high-cut denim shorts and flap-hung painters hat. When has he cared about image, though? It goes all the way back to his "Street Fighter"-esque frosted crew cut when Dutkiewicz drummed in KSE before switching to guitar. The rest of the band frolics, stomps and pulls off limb-twisting theatrics to entertain its crowd, which goes nuts as Jesse Leach woofs into their awestruck faces.

Now at 16 years going on 17, KILLSWITCH ENGAGE spills a proper bio with "Embracing the Journey", which sets a few records straight (if not all) and shows the band at its most human. Tracing the members' origins in OVERCAST, AFTERSHOCK and CORRIN, each spends considerable time exposing their stories and lifestyles on the road and off. Playing all over the northeast metal scene to (by their estimation) 5 to 10 people a night and losing five hundred bucks per venue doing so, the rags-to-modest finances story will resonate with KSE's fans and peers.

We're treated to stories about Adam Dutkiewicz leaving his blood upon the drum kit in the beginning before moving to guitar and nearly losing his career to multiple back surgeries. We hear about Justin Foley briefly sidelined by a cycling accident that triggered a broken clavicle. We see KILLSWITCH ENGAGE booed, flipped off and pelted with trash on the fateful night they had to cancel a show where Howard Jones couldn't perform. Phil Labonte from ALL THAT REMAINS subsequently filled in for an entire tour leg as the band sat on pins and needles awaiting Jones's return. Ultimately, the band went dark for a moment in 2011, its constituents following their personal endeavors until Jesse Leach's return.

As Leach is naturally the centerpiece of "Beyond the Flames: Home Video Volume II", it's hilarious listening to him chuckle over an old photo where he's squatting in fervor and confesses to actually being constipated in that shot. Jesse notes about his first tenure in the band, when beads were frequently draped atop his ever-present hardcore band T-shirts: "I was in spiritual warfare then...I was on a different path then...I don't know what I was thinking". Leach lost his roar-torn voice recurrently in those days, having to cancel every fourth show or so, and, at the time, a doctor found a white bump that was feared cancerous. He went momentarily straight edge to clean up his vocals, and testifies to losing his mind while everyone else was partying. This prompted his hasty exit. Oddly, Leach dropped out of music and tried out rasta culture before later tending bar.

"A lot of drunken love fests" later, Jesse Leach and KILLSWITCH ENGAGE appear more focused than ever. This despite the traditional "Killswitch Power Hour", which consists of routine alcohol pounding before show time. Adam Dutkiewicz is far more excited about running the table at "The Price is Right" than receiving two Grammy nods in his career. Fellow guitarist Joel Stroezel might be considered the true soul of the band with all the music he plays and consumes through the break of dawn. All told through "Beyond the Flames: Home Video Volume II", KILLSWITCH ENGAGE is the quintessential band of brothers, and though nothing is guaranteed in life (especially the music life),Jesse Leach should well embrace this return home with full appreciation until the band itself has hit its final notes.