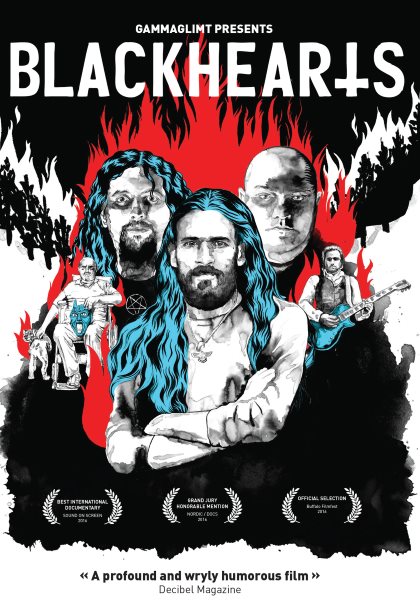 "It was about coldness, sorrow, mountains, darkness, forests…"

Black metal. One of this genre's touchiest subjects. You either know it, or you think you know it and, really, you're clueless. Most people fall into the second category. You either laughed at VENOM's snarky tirades in the name of Satan, or you raised your child from the womb with Cronos's sphincter-tickling growls instead of a cutesy plastic calliope. The latter scenario is no stretch; just ask the members of NAER MATARON.

Over the course of my journalistic pursuits, in 2004 I once trod toward the perimeter of a Satanic cult. My liaison was welcoming and patient, but naturally guarded. At first, said representative offered more caveats than facts. Our relationship was cordial, respectful from both sides, and the offer to meet with other members was extended. The proposal to expand my limited knowledge on mysticism, gained more through Doctor Strange and Ghost Rider comics than actual practice, did appeal to the writer in me, I'll admit it.

Frankly, I lacked the constitution to go further than I was permitted. As a journalist, I was flattered to be entrusted in such fashion. Yet, I felt I was in way over my head. I didn't wish to offend my host by verbally mulling over something that holds deeper meaning for the practitioners than mere pagan rites, ghoul paint, Christian church torching and stereotypical goat heads. You absolutely must know what you're talking about to even bring up the name Varg Vikernes. This arcane form of religion requires deep commitment, even to come to it as an impartial reporter. Thus, you can rightly say I pussed out.

If you ever developed a curiosity about what true black metal means, the documentary film "Blackhearts" is a very good, surprisingly humanistic examination. Yes, it addresses incantations and rites—the bonus footage extending the Colombian Satanic ritual welcoming LUCIFERIAN into the fold is both morbid and unspeakably arousing. Hardly for the timid. Yet there's less direct celebration of Satan in the tone of "Blackhearts", even if this is truly the Devil's work being exposed.

Black metal in its best definition, though? That might be staked from this film with the preamble, "It's like going to war with your friends." The crazed expressions from some attending a GORGOROTH or IMMORTAL gig tells you everything.

"Blackhearts" follows three artists from various parts of the world: Iran, Greece and Colombia. In the case of Tehran-born, Norway-relocated Sina (FROM THE VASTLAND),playing black metal in his native land means possible incarceration, not just for himself, but his entire family. Here, he recounts that to none other than reclusive legend Nocturno Culto from DARKTHRONE. A beast of a vocalist, the soft-spoken Sina's struggle to record his music on his own and land a release deal with Indie Recordings is one of watching "Blackhearts" joys. You find yourself rooting for Sina as he plays his first-ever gig at the Norwegian Inferno Festival, prior to gelling with hired black metal legends at MAYHEM's rehearsal house. Sina is taken to "Helvete", a black metal mecca, the record shop originally run in the early 1990s by MAYHEM's Euronymous. Here he finds himself in the secret basement where the genre was effectively birthed. If you're a fan of this stuff, you're deeply envious.

If Sina's story isn't compelling enough, the imprisonment of Kaiadas, from Grecian black metallers NAER MATARON, for seeking office as a member of the radical Golden Dawn political party, a Greek Parliament seat he won in the in 2012 after being released from jail, will blow you away. The other members of the band and extended family continue their commitment without Kaiadas at the Inferno Festival, and their solemn task is underscored by yellow journalism. Then there's Hector and LUCIFERIAN. Hector's rejection of Christianity is contradicted by being married to a devout Catholic woman. Hector recollects his pact with black metal stemming from a burning church in Colombia, which he watched until the final dying ember. His union with Satan, and a life-changing meeting with incapacitated high priest Don Hector Escobar Gutierrez, who states on-camera, "It's really Satanic or it's not black metal at all," as a roundabout means of sending LUCIFERIAN off to Norway, is nervy. It should be stated that the initiation rites Hector and his bandmates submit to are a path-altering point-of-no-return.

Counterpoint to these compelling journeys "Blackhearts" trails is the exposure of what KEEP OF KALESSIN's Arnt"Obsidian C."Grønbech does outside of his main forum. Like EMPEROR's Ihsahn's solo work, Arnt confesses to liking electronic music, trance, even Christmas music. Meanwhile, his comrade Vegar"Vyl"Larsen is seen playing a standard (conservative, even) guitar rock gig at a sit-down nightclub. The filmmakers likewise trail KEEP OF KALESSIN members as the scene's prolific ambassadors who are also regular family men boasting little-to-no money for their acclaim.

Thus "Blackhearts"'s understated theme develops: the lack of financial gain for playing music that is beyond outsider, beyond fringe. It might be said that this monetary strife fosters the heated, desperate energy needed to sacrifice all and play this style of extreme music. An ordinary metalcore band goes ass-broke on the road with bigger followings, yet all the players profiled inside "Blackhearts" do this, not just for love, but a calling that's higher to them, if not for most people.

The film has its moments of smarm, as in the hilarious opening sequence where the curator of a black metal hall of artifacts is leading around a group of children who are more obtuse than intimidated. The transition scene of an accordion-squishing Santa amid all this clamor is priceless, as is the term black metal veterans use for pilgrims coming to Norway to seek out black metal's roots: "blackpackers". As we follow NAER MATARON on a bus tour of black metal historical locations in Norway, you can't help but chuckle at the insipid, make-a-buck irony.

In the end, "Blackhearts" really is about the coldness and the sorrow, along with the majestic mountains and forests that conjure both wonderment and frigid bleakness. This film went further than I'd ever dared. Though it's delivery is unexpectedly at ease while addressing this dark topic objectively, and, in some ways, it still left scars upon me as if I'd taken up that offer back in 2004.