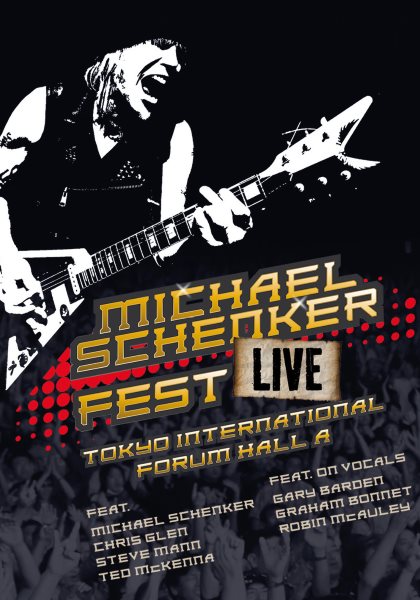 If the past tells us anything, it's that some things are strictly of their time and place. One might be tempted to nick a few bars of Michael Schenker's "Let Sleeping Dogs Lie" in judgment of his well-intended if staggeringly muffed return to MSG roots. Currently riding a high with his TEMPLE OF ROCK, one can only think comradeship and a pining for past glory days played into this Tokyo, Japan gathering of MSG alumni on August 24, 2016.

Now remember, Michael Schenker and MSG released 1982's "One Night at Budokan" when Michael was 23, already staking the career of a lifetime eight years prior. Considered by many as one of the all-time great live albums, lightning assuredly doesn't strike twice as we near that landmark recording's 35th anniversary. Without beating up Schenker and his supporting cast on "Michael Schenker Fest Live, Tokyo International Forum Hall A" too harshly, the spirit is there. So are names from Schenker's past like Gary Barden, Graham Bonnet, Robin McAuley, Chris Glen, Ted McKenna and Steve Mann. Schenker's trusty Flying V: also there.

The rehearsals alone for this 18-song reminiscence were most likely brutal after so long a separation; it's remarkable the group got so much of it together. Nonetheless, "Michael Schenker Fest Live, Tokyo International Forum Hall A" is a disappointment as much of it is the post effects of a train wreck and during Graham Bonnet's appearance, the actual collision itself.

Four songs from the set list are pocked from the 1980 "Michael Schenker Group" album, grabbing "Into the Arena", "Cry for the Nations", "Armed and Ready" and "Victim of Illusion", the latter as much a live Schenker staple as "Coast to Coast". "Attack of the Mad Axeman" and "Let Sleeping Dogs Lie" appear from the '81 "MSG" album and the delightful instrumental "Captain Nemo" from "Built to Destroy" makes a welcome appearance. Schenker hoists three selections from the Graham Bonnet-led "Assault Attack" album including the title track, "Desert Song" and "Dancer". Another three from MSG's softer-toned era check in with "This Is My Heart", "Love Is Not a Game" and the set's best number, ""Save Yourself". Naturally, the show is capped by a stoic run through UFO classics, "Shoot Shoot", "Rock Bottom" and a gang-tagged encore of "Doctor Doctor".

Many fans may be remiss "Lost Horizons" didn't make the cut, but then again, given the overall sluggish performance, seven minutes extra was probably much to ask from a group that hardly plays together anymore. As much as the 5,000-strong Tokyo audience sits in reverence and anticipation during the "Searching For Freedom" intro, by the time the sputtered "Into the Arena" limps into play, it's to their credit they absorb what's given to them.

Never say Chris Glen, Ted McKenna and Steve Mann didn't have a blast playing this show. Their constant smiling, their gleeful laughter, Chris Glen's random mugging and smothering bass clouds, it's all endearing and for that, we should be happy. Michael Schenker, sporting a customized denim shirt with patches outlining his career with UFO, SCORPIONS, MSG and TEMPLE OF ROCK, sells the moment to his flock while checking himself down repeatedly. "Attack of the Mad Axeman" is, frankly, too slow, but Schenker shreds only fast enough to rip the scales appropriately. He avoids overshadowing his band, including Gary Barden, who swings through the number amply enough.

Barden shines on the bobbing "Victim of Illusion" and guides the Tokyo fans through a firm rendition of "Cry for the Nations". "Armed and Ready", however, is astonishingly flat, as is Schenker's signature SCORPIONS instrumental, "Coast to Coast". The latter flop is hardly his fault, and given the fact Michael Schenker mandatorily plays it at every show he plays, an off night with old friends is merely to be endured.

Graham Bonnet, whose name has cropped up lately more than even Michael Schenker's current mike ace, Doogie White, brings the party behind his dick-swinging "Miami Vice" duds. He also brings utter chaos in his own inimitable fashion. Graham Bonnet, whose finest hours were stationed inside his own group, ALCATRAZZ, was never given a chance to perform with Michael Schenker onstage. While Bonnet's vocal style has always been an acquired taste, when hanging in the clean ranges, one understands why he was given so many chances during the 1980s. To be fair, the man is coming upon 70 years, and anyone who gets out there with the sheer balls Bonnet has—well, it's compelling to watch. Even if he makes a mess out of "Assault Attack" and (with McAuley and Barden supporting him) the uber-commercial "Dancer", you can't take your eyes away from Bonnet. He's an unabashed alley cat, hard on the ears, yet so much in control of his domain, particularly on "Desert Song", where he maintains control while the band shanks it instead.

The tatted-up Robin McAuley is the saving grace of this whole venture. Still in magnificent vocal form, McAuley's caliber finally sets the band on firm footing, even if it's on MSG's less driving material like "This Is My Heart" and "Love Is Not a Game". When the band tears into "Save Yourself", however, everything clicks like it's 1989 again, even if Chris Glen and Ted McKenna had already left by then. Funny how, after scoring a hit on "Headbangers Ball" with "Gimme Your Love" in 1987, the song refuses to budge from Schenker's vault.

From an enthusiasm standpoint, this performance rates a 10. For nostalgic value, give it a 9. The UFO material comes off well, and that's because Robin McAuley is so dynamic and Schenker is so determined to finish this gig on a high, particularly during his jam sequence on "Rock Bottom". With McAuley, Barden and Bonnet wailing like graduating teens sneaking through the late hours of a shackles free pub crawl on "Doctor Doctor". It's a huge, wild moment and exactly what this awkward show needed to end with.

We can all agree to cut some slack for this fun intended if bumbled MSG class reunion. The late Cozy Powell might've picked this dragging concert up a few clicks, and though he's a classy stage performer, you have to think Michael Schenker at least wantedPowell on the stool. This so he could fly instead of hang back so as not to dust his old team. Nevertheless, there is a glaring difference between this and the soaring TEMPLE OF ROCK, likewise fortified by elder rock lords, in that case, exhibiting a ton of steam.