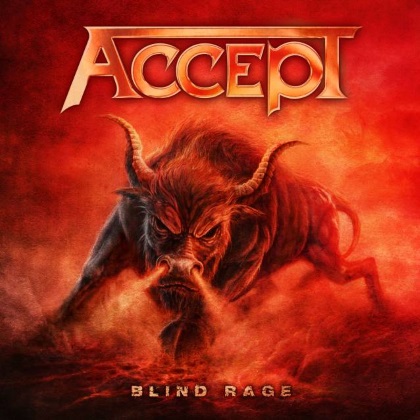 If there's any old-school metal band worthier of resurrection than ACCEPT, let them make their stand now. ACCEPT 2.0 with Mark Tornillo fronting them has been exemplary proof there's life after death and that you can buck the naysayers by believing in what you're doing and going full force regardless of who follows or not. Now laying down their third album within the five years since their re-launch, ACCEPT shows once again on "Blind Rage" they're masters of their trade, no matter who holds the mike.

Working for the third consecutive time with producer Andy Sneap (MEGADETH, TESTAMENT and EXODUS) since their 2009 revival, the vow by Wolf Hoffmann to "never change a winning team" may sound trite to Udo Dirkschneider holdouts, but the intent is well-meant and well-kept. Sneap knows the ACCEPT sound so intricately, it's no wonder he's backing them once again. He's a considerable factor to why they still sound so loud and powerful after all these years. His understanding goes straight down to fusing the masculine whoa-oh chants and baritone gang backers on the choruses for "Dying Breed", "Wanna Be Free" and "Fall of the Empire" to complete the illusion this as much an ACCEPT album as any that's come before it.

"Stampede" is so good at taking the German power metal standard and throwing just enough melodic twists and variations into the chord patterns it all sounds fresh. There's no arguing ACCEPT was rejuvenated with "Blood the Nations" and "Stalingrad", but they sound as much in command of themselves as they did in the mid-Eighties and no proud headbanger should call this one a lame duck. "Dying Breed" right afterwards maintains the same confidence with perfectly-plotted riff structures and a chest-thumping anthem saluting metal diehards from the old school. We've heard tons of songs bearing a similar theme, even from ACCEPT themselves, but every crevice of "Dying Breed" rings with conviction and layered depth, making it an instant classic for the band. Listen for Mark Tornillo to throw a gravelly nod to Lemmy Kilmister with the mention of "ace of spades" in the middle of the song.

"Dark Side of My Heart" goes right to the "Metal Heart" playbook with a bass-driven, beat-smacking glide, but before anyone can scream regurgitation, the bleeding choruses of this number give it its own character. The slower march of "Fall of the Empire" loses not an ounce of strength as Mark Tornillo rallies his troops behind him and engineers a bulging, lingering storm. In a cool twist, the guitar solos on "Fall of the Empire" bear a little more soul than the usual blitz modes Wolf Hoffmann and Herman Frank whip up.

Whipping is what Hoffmann and the band do on the double-timed "Trail of Tears" and later, "Final Journey". They tirelessly grind out these fast power jams with terrific harmony, cracking beats from Stefan Schwarzmann and a gruff but appealing delivery from Mark Tornillo. In a period of metal where speedy cuts are almost always intercut by an abrupt signature change or two, "Trail of Tears" and "Final Journey" have the courage to stay old school and stay brisk. The barest trace of a slowdown on either song are the bridges serving only to let Hoffmann and Frank rip beauteous tag solos while the songs stay focused upon their quick continuums.

The leisurely acoustic intro to "Wanna Be Free" would imply a softie, but instead, ACCEPT stamps down and delivers a mid-tempo banger that disguises what is effectively a hammered-out ballad. The rich guitars and Peter Baltes' dropped-in bass rolls give "Wanna Be Free" added resonance, while the rocked-out bridge and solo section show as much wisdom as self-assurance in this band, from which the apocalyptic-themed "200 Years" bounds from.

Once again tricking their listeners with the cautious opening to "Bloodbath Mastermind", the smacking tones ensue as ACCEPT commandeers a customary power metal ride you'd expect in this band or over on the other side of the original contingency in U.D.O. Ditto for the hearty esteem contained within "From the Ashes We Rise", a nod to "Balls to the Wall"-era ACCEPT with a couple of minute signature change-ups between its straightforward drive.

At this point, there's no need to keep climbing on Mark Tornillo's back. ACCEPT through these past three albums have been more about the band as a whole than a head-turning change at the front. Besides, Tornillo's done more than anyone could've expected, stay let's enjoy the ride. "Blind Rage" plays all the tricks ACCEPT have, but the good news is they've reached further into their bag and come up with even more metallic razzle-dazzle their fans should be giddy about.