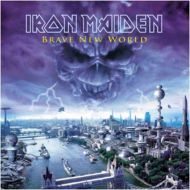 Following more than a year of relentless hype and a host of excellent live performances, the new IRON MAIDEN CD is finally upon us, and predictably enough, it represents nothing more than an attempt to recapture past glories without any effort being made to update the group's sound to accommodate younger fans who may not have been exposed to the act's music the first time around. Granted, IRON MAIDEN have always made albums that sounded decidedly alike, and compared to the drivel that the band issued under their name while being fronted by the ridiculously inferior Blaze Bayley, Brave New World is a virtual masterpiece, its every track echoing the group's finest moments from the '80s. However, in an era of musical innovation—even if it includes the fusion of elements that are seemingly as at odds with one another as metal and hip hop appear to be—IRON MAIDEN's regurgitation of past musical moments sounds positively tired and uninspired, with the overlong, sleep-inducing epics like "Nomad" and "Ghost of the Navigator" coming across like a bad trip down the nostalgia lane, their effectiveness reduced merely to an overriding air of familiarity rather than the songs' own musical merits.

It goes without saying that the old-school metal "purists" will hail Brave New World as a flag-waving return to form from one of the genre's most influential and enduring artists. Ultimately, however, IRON MAIDEN's latest CD will appeal to no one but the die-hard fans of the group, and as such, it will fail to leave a lasting mark on the face of the current metal scene.