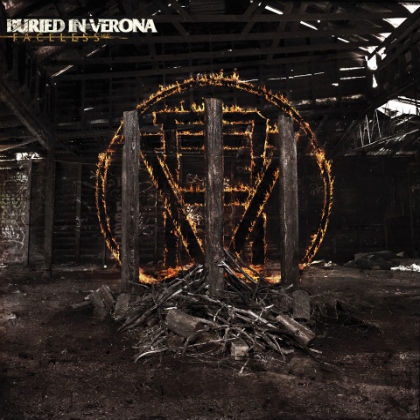 Australia has a red-hot metalcore scene and one of its figureheads is BURIED IN VERONA. Following their fan-favorite previous album "Notorious", BURIED IN VERONA will satiate their target audience, but perhaps no else, with album three, "Faceless". Despite their admirable spirit for genre bending, BURIED IN VERONA plugs the same sets of low-end chord riffs into most of "Faceless" and any intent of creativity is undermined accordingly.

What's more annoying about "Faceless" is its purported street violence spread throughout the packaging that includes depictions of nihilistic torment upon a pair of kids by hooded aggressors, plus a hangman's noose and a hand missing one of its digits. On the rear cover, we get BURIED IN VERONA as alleged teeth-mashing avengers. All of it is more apropos for a death-tech or hard industrial album, and all of it points to artifice in this case. There are far too many "nice guy" elements pushing through BURIED IN VERONA's commotion to consider them or their music genuinely evil. Trying to sell anarchy with bucket loads of clean portions? Consult the catalogs of MINOR THREAT and DAG NASTY if that's the objective.

"Faceless" would be easier to digest if BURIED IN VERONA didn't heap on repeated chug parts plus electronic scratching and scrambling as a primer to their songs instead of as a supplement. As much as they want to mash diverse schools of thought into their music, there's a lot of peskiness as there is motivation to this album.

To the positive, BURIED IN VERONA do have a sharp sense of melody about their faux rebellion to the point "Catatonic" rises above the norm with fluid bang patterns on the verses, followed by sweltering clean choruses. "Antidote" kicks ass when it gets away from the breakdown chunks and huffing distorto-chords. As menacing as BURIED IN VERONA attempts to portray themselves, they're countered by conscience in the form of un-rowdy harmony and spiffy cleans. "Revival" is damned near cheerful at times and it stays on a peppy, hopping course. The rap lines on "Blind Eyes" are actually well-delivered and the stepped-up quasi thrash on the verses of "The Faceless" is great stuff, but in both cases, they lead to the same ol' same ol' core stomps and ultimately hit the same ol' same ol' wall.

The about-face moment on "Faceless" comes with the hasty ballad "Set Me On Fire", which finds Brett Anderson dispatching all of his screams and Richie Newman lightening up his guitar lines that mimic The Edge of U2 on the song's windswept choruses. In the midst of the repetitive grind and digi-crunch of "Faceless", "Set Me On Fire" is a glaring and naked lean toward indie pop. A well-constructed, accessible number that seems to envy F.U.N.'s "We Are Young" as this generation's defining anthem, it still seems ill-advised against all of the would-be pugnacity and tone decimation BURIED IN VERONA hides behind. These guys can play like beasts, but sorry, the secret's out.