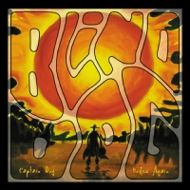 Just who Captain Dog is and what his purpose is in life remains unclear, you would think, to all but the three desperadoes who make up this Swedish outfit. But then again — and at the risk of doling out every stoner rock cliché in the book — who gives a flying fuck when you can light up a big fat one and feel their bass-laden grooves ripple your cheeks like a wind tunnel set on "hurricane".

In the main, there's nothing drastically different here from what you may have heard rumbling out of the desert via KYUSS, or from the tailpipe of FU MANCHU's sonic hotrod. Be thankful, though, for BLIND DOG's reluctance to be a bottom-of-the-stack generic band that simply turns up, trips out and numbs the listener because they're too blitzed to string more than two chords together (whoops, there goes that cliché again).

SABBATH is naturally the first reference point when the likes of "Follow The Fools" and "Fading Memories" strike up their elephantine march, yet as with the aforementioned stoner gurus, BLIND DOG are also partially striving for that foot-tapping trigger that could propel them into the conscience of the mainstream given the right conditions and resources.

Elsewhere, they head off into a monster jam on "Would I Make You Believe" that could've done with a hefty piece of editing, whilst acoustic closer "Be the Same" serves as nothing more than a comedown from the album's electric bludgeon.

Not bad, but QUEENS OF THE STONE AGE have no need to be worried about their exclusive stoner chart status just yet.