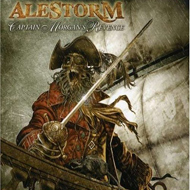 After the excellent folk metal juggernaut that is SVARTSOT's "Ravnenes Saga", Austria's Napalm Records gives us another grand slam in "Captain Morgan's Revenge" by ALESTORM. If you're like me, you chuckled when first reading the album described as "Scottish Pirate Metal" (I mean, how could you not?),but one listen to "Captain Morgan's Revenge" and you'll be hooked. There is plenty to be cheery about on this one, thanks to an unabashedly thrashy power metal approach mixed with the folk melodies of vocalist/keyboardist Christopher Bowes. Once again, fun is the name of the game and you'd be hard pressed to avoid running right down to the local watering hole after consuming this one.

As for the "pirate" in "pirate metal," forget about trying to imagine what the disc may sound like and just listen to it. It will make perfect sense, trust me. The gritty, whiskey-tongued voice of Bowes is oddly infectious, yet anything but polished and sweet. Listening to him sing about drunken escapades and renegade seafaring is somehow believable and utterly intriguing. On a song like "Nancy the Tavern Wench", the chorus will takes you straight to the pub with all your filthy and inebriated pals, many of whom are missing more than a few teeth. The melodies are so endearing and so immediately memorable, not to mention unique and a significant departure from what most would consider folk metal. Aside from the album-closing traditional drinking anthem (and unofficial national anthem) "Flower of Scotland", many of these tunes flat out rock! "Terror on the High Seas" is but one example of the band's balls-out metal approach, in this case one that features an in your face shout chorus.