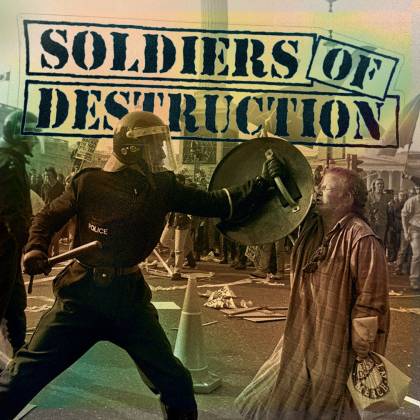 If you're old enough to remember when punk rock was all about broken windows and police sirens rather than wacky lyric videos and brightly colored merchandise, you may find "Cause And Affect" to be a suitably jaw-shattering return to punk propriety. Formed in London in 1981 and splitting three years later, the original SOLDIERS OF DESTRUCTION never bothered a studio, but due to a presumably fascinating series of events, the band recently reunited with a view to dealing with some unfinished business. Now based in Las Vegas, they have clearly picked up exactly where they left off, and delivered a pure, red-blooded blast of raging punk 'n' roll, with seven new songs blending seamlessly with seven songs from the quartet's first incarnation. It's a riot from start to finish.

Noisily suggesting that knowing more than three or four chords is an unnecessary indulgence, SOLDIERS OF DESTRUCTION tear through most of their debut album at a manic pace. "Anti-Them", "Cracked", "Drinking For Two" and the Trump-scorning "Undefeated" are all indecently thrilling, with thuggish hooks and plenty of snot and swagger, while noble Lemmy tribute "Kilmister" is a vastly more exciting and fitting salute to the MOTÖRHEAD legend than certain other high-profile efforts one could mention. Elsewhere, NICK OLIVERI (STONER / ex-KYUSS / QUEENS OF THE STONE AGE) teams up with frontman (and music journalism legend) Mörat to scream like a madman on the self-explanatory "Amphetamines" and the darker, dirtier "Also Gazes", while the mid-paced thump of "Sick Of The Sight Of You" dials up the COCK SPARRER vibes with a shout-along chorus to savor.

It's self-evident that the instinct to smash stuff and cause some aggro hasn't left these veterans. "Cause And Affect" taps into the same sense of frustration and drunken chaos that made classic records by the likes of GBH, DISCHARGE, U.K. SUBS and ONE WAY SYSTEM so exhilarating 40 years ago. They took their time to add to that illustrious canon, but the wait was worth it, and SOLDIERS OF DESTRUCTION are cheerfully giving punk rock another much-needed kick, as we say in the UK, up the arse.