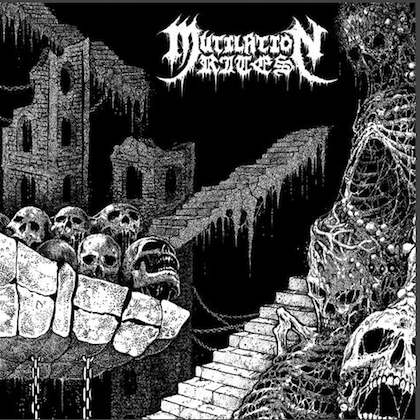 The blackened beast of Brooklyn's MUTILATION RITES has returned with its third album: "Chasm". While New York has a bit of a reputation for some pretentious black metal in recent years, the act released an ugly, debut long player in 2012 titled "Empyrean"—following a split, some EPs and demos—that grasped the spirit of DARKTHRONE and expressed it with a greater focus upon ferocity. The quintet followed up with "Harbinger" a couple of years later, taking a bolder leap with its core sound while maintaining the aesthetic of the second wave of black metal. The band turned towards more daring and melancholic ideas that were peppered with dizzying sections.

If its sophomore effort didn't provide enough confirmation, "Chasm" makes it clear that the New York-based group isn't concerned with serving the demands of the extremely musically conservative bastion of black metal purists. It's not much of a stretch, in fact, to say that "Chasm" isn't a black metal album per se. If genre tags are necessary, the release might more properly be defined as one that's blackened death metal that flirts with thrash. It hasn't abandoned its established sound. Instead, MUTILATION RITES has taken a progressive mindset toward songwriting in crafting a more aggressive album that, arguably, has more in common with death metal than traditional second-wave black metal.

With a brutal death metal riff that sounds repurposed by a black metal band, they stoke the furious flames off the bat with opener "Pierced Larynx", suggestive of the intensity that follows. Interestingly, the song merges into a classic, murky AUTOPSY and Swedish death sound with a mid-tempo stomp. It's clear that "Chasm" is MUTILATION RITES's hardest hitting, most visceral and immediate effort. The latter third of the track is more reminiscent of its tried and true strength, an ability to craft material that's just as relentless as it is hypnotic. The transitions flow naturally and seamlessly. Nothing throughout the impressively dynamic release sounds forced or out of place: MUTILATION RITES has sharpened its tools. The ensemble proves that its able to capture a slice of the sublime and the surreal with an eye towards madness with its rabid delivery and performance. Subsequently, various points of both "Ominous Rituals" and "Post Mortem Obsession" boost its capacity for progressive music in an arguably post metal sense.

The final two songs, the title track and "Putrid Decomposition", have more in common with the band's first two long players due to the more prominent inclination for black metal. The band is enjoyable enough; however, they are certainly not as interesting as all that came before. Aside from "Axiom Destroyer", the six songs on "Chasm" exceed six minutes in length, which isn't a crime, but the lengthy tracks could have been trimmed for better