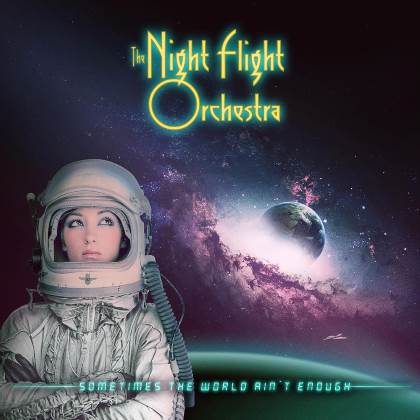 I've said it before elsewhere and I'll say it again here. If the members of THE NIGHT FLIGHT ORCHESTRA were a group of fashionably dressed Brooklyn indie-rock hipsters in their twenties, the group would be one of the biggest rock bands on the planet. I have zero doubt that the band would be a main draw on the main stages of music festivals such as Coachella and The Governors Ball, with appearances on "The Late Show with Stephen Colbert" and "Saturday Night Live" in between. But instead, since the cornerstones of the band are members of Swedish heavy metal legacy acts in their forties, we'll have to settle for THE NIGHT FLIGHT ORCHESTRA quietly churning out some of the purest fun rock records on the planet.

For those of you that are new to THE NIGHT FLIGHT ORCHESTRA, the group started as a fun side project for SOILWORK vocalist Bjorn"Speed"Strid and then-touring guitarist David Andersson – soon joined by bassist Sharlee D'Angelo (ARCH ENEMY/WITCHERY) – to indulge in a love for the catchiest corners of the 1970's rock spectrum. Whereas the majority of acts looking to the '70s search for inspiration in the earlier part of the decade – GRETA VAN FLEET's mining of LED ZEPPELIN's songbook being the most prominent current example – THE NIGHT FLIGHT ORCHESTRA turns its ear of influence towards the second half of that decade, when bands such as KISS, CHEAP TRICK, and ELECTRIC LIGHT ORCHESTRA generated rock that was as catchy and sugary as the pop music of the era.

The busy schedules that Strid and D'Angelo maintain with their main acts keep THE NIGHT FLIGHT ORCHESTRA relegated to side project status with sporadic live performances. Since its 2012 debut "Internal Affairs", the band has lurked in the shadows of the metal scene, indulging the members’ love for the rock that dominated the airwaves shortly before the 1981 launch of MTV, with love-obsessed power ballads and hard-driving odes to the greatest rock and roll cities around the world serving as band's primary lyrical focus. Now six years into its recorded output, the band's latest record, “"Sometimes The World Ain't Enough", is exactly the type of album that would have been released by a similar-sounding band that got its start in 1975 and was now adjusting to the change of the decade heading into the 1980's, with the synthesizers of keyboardist Richard Larsson taking a more prominent role as an era-appropriate record would have.

The record gets off to a fast-paced start, with opening track "This Time" serving as a showcase for D'Angelo's warm bass lines, Strid's croons and Larsson's ability to replicate the orchestral keyboards popularized by Richard Tandy of ELECTRIC LIGHT ORCHESTRA. But it's the second track, "Turn to Miami", that really shows the band's knack for replicating the changing trends of the era they pay tribute, aping the direction that GENESIS took its sound during that time as it shed the last vestiges of its more pretentious prog-rock beginnings, with a rousing chorus of backup singers to boot.

This is then followed by "Paralyzed", which steps a couple years back in inspiration in its delivery of a sexy, funk-laden disco-rock jam. The rest of the record is a fun trip through the early '80s rock-radio playbook. On just about any other record that would be reviewed on this site, a track called "Moments of Thunder" would be a heavy metal assault on the senses. Here, it's a beautiful AOR power ballad with Strid earnestly crooning about lost love.

I would be remiss if I also didn't praise the guitars of Andersson and Sebastian Forslund, both of whom overload every track with plenty of hooks, with their own nods to greats of the past, most notably on "Speedwagon" where they crack the code of pulling off the tone of QUEEN's Brian May.

Is anything done by THE NIGHT FLIGHT ORCHESTRA original? Nope. But are they damn good at writing songs that would have been hit singles in the era they are paying tribute to? Yep. Do those songs still sound amazing in 2018? Most definitely.