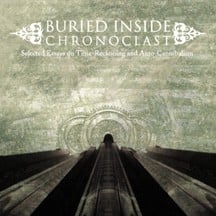 What's with Canadians and drum wizardry? First we have KATAKLYSM's marching-band "hyperblast," and now Ottawa youngin's BURIED INSIDE are pulling off some kind of similar rat-a-tat-tat that turns their "blast beat" sections into a friggin' avalanche of sound. Meanwhile, they're shifting from these utter obliteration parts to quasi-melodic noodling that's somewhere between metalcore and MASTODON, propelling thick black sheets of NEUROSIS/ISIS guitar apocalypse outward toward the center of the galaxy, and screaming until hoarse and bleeding about some sorta highfalutin crap that I'm not gonna venture a guess about till I get a lyric sheet. The whole thing is strung together with moody instrumental segues and disquieting passages that prevent the more chaotic moments from getting monotonous. The overall effect is that of one movement, an epic concept album heavy on the endtime revelations, transcendental ambience and overdriven waves of punishing, inexorable guitar melody.

Like labelmates and countrymen THE END, BURIED INSIDE aren't really doing anything different with their particular pile of post-DILLINGER ESCAPE PLAN math-metal hardcore grind scraps. But they're just idiosyncratic and dynamic enough to make their trip worth taking, even if it's a bit droney and repetitious in spots. This band should go down a storm with enough CONVERGE and ISIS fans to ensure their survival, which is a good thing, because if this is their starting point, they could be retooling minds en masse and causing some serious damage in another couple albums.