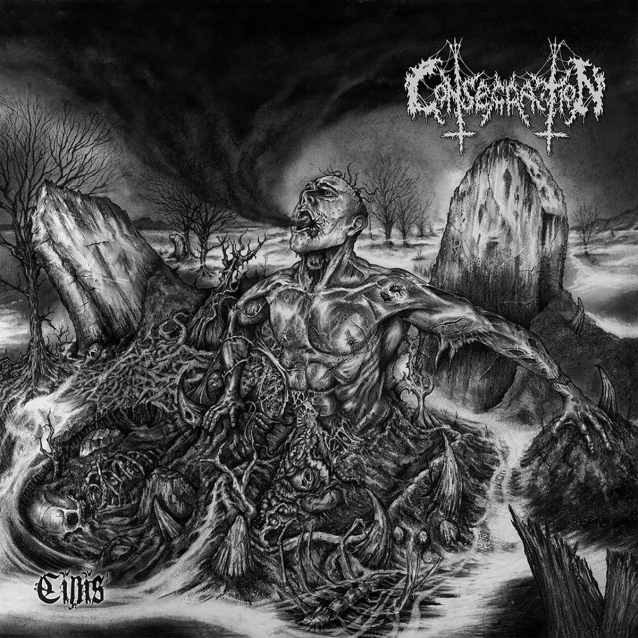 01. The Dweller in the Tumulus
02. Ground to Ashes (A Cremulation)
03. Embrace of Perpetual Mourning
04. A Dying Wish
05. These Fleeting Memories
06. The Charnel House
07. A Sentient Haunting
08. Unto the Earth Bethralled
09. In Loving Abandonment

Fast is fun, but slow is heavier. CONSECRATION are well aware of the potential power of death metal riffs played at snail's pace. Active since 2010, the UK quintet have been resolute in their dedication to puritanical death/doom. Spiritually linked to the pioneering misery of MY DYING BRIDE and MOURNING BELOVETH, but also kindred spirits to latter-day slaves to the dirge like HOODED MENACE and SOLOTHUS, CONSECRATION are honestly and purely heavy in a way that few bands are these days.

Not that there is anything wrong with expanding metal's remit, of course, but "Cinis" exists to satiate a particularly atavistic and omnipresent itch. As it unfolds via slithering, desperate opener "The Dweller in the Tumulus", the sheer myopic savagery on display here is instantly heartening and weirdly refreshing. Vocalist Daniel Bollans has one of those borderline inhuman growls that frequently suggests a man in severe existential distress, albeit while trapped in ice and gliding majestically toward the abyss. Meanwhile, the riffs are uniformly gripping: either pointedly pained and stretched to infinity or grim and pummeling in a deeply satisfying, BOLT THROWER kind of way, these are riffs hewn from ageless bedrock.

Bleak and austere, in contrast with many of their peers' cartoonish horror shtick, CONSECRATION have a winning way with hazy, instrumental interludes: a throwback, perhaps, to the more gothic tendencies of the earliest death/doom bands, but one that wields its own unique magic here. "Embrace of Perpetual Mourning" is an absolute gem, building from a delicately sonorous intro into the hell-bound mother of all squinting, nihilistic doom riffs. Drawn-out and devastating for a full 11 minutes, it's a magical moment, haunted by the ghost of BLACK SABBATH's primitive blueprint, but untamed and disorientating, in harmony with the farthest out of doom's esoteric contingent.

The rest of "Cinis" frequently comes close to the same, dizzying heights. In particular, "A Sentient Haunting" is as commanding and crestfallen as CANDLEMASS at their authoritative best, while "Unto the Earth Bethralled" spurns the leaden precision of much modern doom, exhibiting a whole heap of swing and offbeat menace in the process. Again, the riffs are consistently magnificent and beautifully despondent throughout, with only conciliatory prettiness of closing, acoustic instrumental "In Loving Abandonment" to soothe your psychic bruises. By adhering ruthlessly to an unsullied blueprint, CONSECRATION have ascended to a higher level of sorrow.