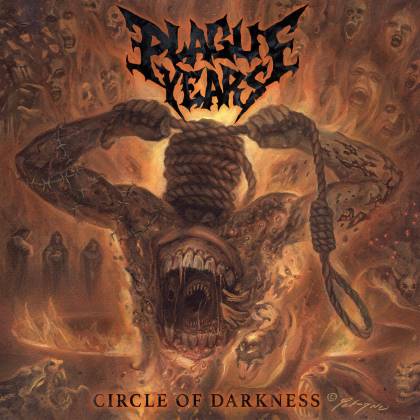 There's always been something uniquely exciting about collisions between thrash metal and brutal hardcore. Recent records by the likes of RINGWORM and INTEGRITY have proved that point tenfold, but while PLAGUE YEARS are considerably more traditional in thrash terms than either of those bands, there is a similarly destructive and anarchic vibe here. Vocalist Tim Englehardt occasionally sounds a lot like INTEGRITY's Dwid Hellion, too, but "Circle of Darkness" takes its most essential cues from the ultra-dark fringes of the thrash firmament, from the obvious benchmarks of SLAYER, KREATOR and DARK ANGEL, through to more recent purveyors of filthy speed worship like POWER TRIP and ENFORCED.

Superficial scene resemblances aside, this is an incredibly potent and memorable big label debut; full of monstrous old-meets-new school anthems and steeped in thick, ominous atmosphere. With more than a little death metal coursing through their veins, the likes of "Witness Hell" and "Paradox of Death" are considerably more brutal than mainstream metal fans will be used to, but PLAGUE YEARS' near-psychotic intensity and sense of murderous momentum will draw in crowds regardless. But it's on more epic and adventurous material like the utterly crushing "Eternal Fire" and gruesome closer "Urge To Kill" that the Detroit quartet indicate the colossal potential being steadily tapped here. Armed with slower tempos and space for ravaged vocal hooks and disorientating, doomy detours, PLAGUE YEARS sound more like weather-beaten veterans than wide-eyed newbies. Similarly, songs like "Incantation" and "World In Blood" deliver everything thrash diehards demand, but in such a way that "Circle of Darkness" never feels generic or tethered to someone else's vision.

Thrash has always been a diverse genre, with equal room for goofy party vibes and infernal paeans to the abyss. In 2020, it's the latter approach that seems most fitting and timely, and PLAGUE YEARS have absolutely nailed the desolate spirit of the age via some truly ripping thrash fucking metal. And we can never have too much of that.