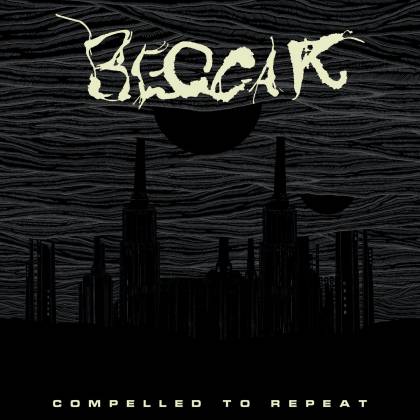 With all due respect to hirsute drug fiends everywhere, sludge metal is not exactly the most difficult music to play. What is far trickier to pull off is sludge metal that actually rings true, with all the hate, disdain and booze-sodden fury that made the likes of EYEHATEGOD and IRON MONKEY so compelling in the first place. Superficially, BEGGAR aren't doing anything radical here: this is comparatively straightforward and brutish sludge, with a dash of southern rock swagger and the influence of gnarly underground metal omnipresent. But when it comes to conviction, to real viciousness and to actually sounding like they might burst through the speakers and kick the living fuck out of you, this London-based crew have absolutely nailed it at the first time of asking.

"Compelled To Repeat" is undeniably heavy and blessed with some truly grotesque and gripping riffs, but it's the sheer vitriolic intensity of the whole thing that seals the deal. "Blood Moon" and "Anaesthete" make for a particularly bruising initial one-two, as BEGGAR lurch from pitch-perfect, slow-motion hate core to flat-out pugilistic clatter, with occasional detours into moderately melodic territory and a treacly fog of druggy weirdness bubbling away in the background. "The Cadaver Speaks" is even more grim, as angular doom riffs and a bluesy groove conspire to drag everything into some unnamed, blazing abyss of noise. Best of all, "Black Cloud" is monumental: slowing to a stately post-metal meander, BEGGAR reveal hidden subtleties in their sound, before an inevitable pile-on of giant riffs and a mesmerizing, FLOYD-ian lead break slams the nihilistic point home.

The album's second half somehow manages to sustain the electrified and electrifying pace, with everything from the trippy grind-blitz of "Trepanned Head Stares At The Sun" to the title track's lumbering, multi-tempo descent-into-hell sounding like the work of blank-eyed and remorseless killers, albeit killers with a reliable supply of good weed and skin-scorching moonshine.

However you slice it, this is a monstrous debut and one of the finest sludge records to emerge in years. There's massive potential here — at times, BEGGAR sound like they're mutating in real time — but there's also a strong sense that this isn't just hairy men making a horrible noise: this is the real, soul-wrenching deal and it's definitely going to hurt.