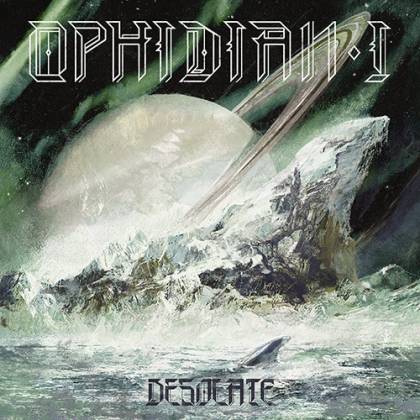 You very well might be picking up your jaw from the floor after hearing any 20-second excerpt from OPHIDIAN I's new album, "Desolate", by virtue of the dizzying, intricate barrage of blasting, soloing and riff-work at hand. The Icelandic band has been touted as a newcomer, but that isn't exactly the case. Formed in 2010 and following an impressive demo in 2011 and their debut album "Solvet Saeclum" the next year, the band was essentially shelved (aside from releasing the "Whence They Came" single in 2014),yet not abandoned.

During the unit's extensive period of inactivity, guitarist Símon Þórólfsson spent time with the black metal project HELFRO and bassist Þórður Hermannsson was involved with the heavy rock act LIGHTSPEED LEGEND. Bringing those experiences and additional time devoted to musical growth back to this band, that core duo has since enlisted guitarist Daníel Máni Konráðsson, singer John Olgeirsson and drummer Ragnar Sverrisson. It's clear that the band has been anything but prolific, but a nearly decade-long gap between its debut album and sophomore effort has been well worth the wait.

Key sections of songs like "Spiral To Oblivion" are abundant and they shift dramatically in mood and pace. The relatively upbeat and cheerful opening section breaks into an abrasive and ominous space several times throughout the song. Adjectives like upbeat and cheerful would typically be taboo in the realm of death metal, but tech death has long traveled a path that's in many ways well beyond the scope of death metal, more along the lines of prog.

A flurry of notes is doled out in every song, and just when one might think the band has maxed out on its hyperspeed guitar and drum activity, OPHIDIAN I pushes the technical, computer-generated music-making envelope even further on "Unfurling The Crescent Moon". And this is where the two-edged sword cuts for OPHIDIAN I. At best, the impressive musicianship is inspiring, at worst, the album brushes against a lifeless and soulless quality. The latter point shouldn't be overstated, though.

OPHIDIAN I will make their mark because they are a technical death metal band concerned with creating well-written songs, not just technically outperforming the next band. The songs do feel too similar to one another at various points, though. The most interesting moments arrive when contrast is provided, whether it's the more lethal crunch on "Captive Infinity" or when they employ repetitive, throbbing melodic guitar lines on "Enslaved In A Desolate Storm". Hopefully it won't take another 10 years for us to hear the next album from the Reykjavík-based band. In any event, "Desolate" is an album that puts an act like ARCHSPIRE to shame, because this is catchy and memorable modern tech death.