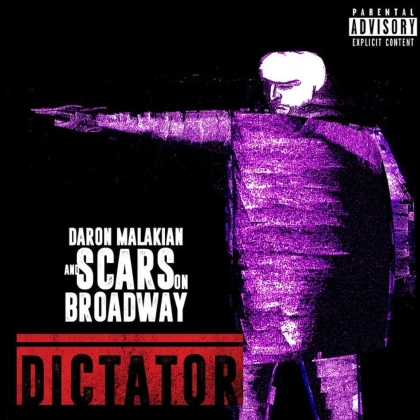 DARON MALAKIAN AND SCARS ON BROADWAY

Daron Malakian will probably always primarily be known as the impressive, genre-defying guitarist of SYSTEM OF A DOWN. More than a decade has passed since that outfit's last album, and while it's teased the possibility of a sixth album, the prospect seems uncertain. In lieu of new SOAD material, said band's fans have reason to rejoice about the return of Malakian's SCARS ON BROADWAY. That's because while SCARS ON BROADWAY's previous album, its self-titled debut, which was released a decade ago, had more in common with linear hard rock music, its sophomore effort, "Dictator", essentially breathes life into the dormant SOAD sound.

"Dictator" is a collection of energized, spirited, quirky bangers that Malakian recorded six years ago and kept aside initially for SOAD, possibly. The first single, "Lives", touches upon the cause that SOAD regularly championed, the Armenian genocide. It pays respect to the survivors of the atrocity whilst sonically resembling the energetic yet refined bounce of SOAD deeper into its recording career. The next couple of songs, "Angry Guru" and "Dictator", follow suit in terms of spirit and appeal, making it obvious that they were in fact intended for the possible return of SOAD. The material is good, especially compared to the homogenized sounds of what's regularly touted by industry insiders as quality, contemporary heavy music of the mainstream variety. Inevitable comparisons to SOAD do arise because of the stylistic similarities, and as such, longtime fans and listeners are likely to be left wanting the rest of that band's lineup involved. "Dictator" is basically a well-produced demo of what could have been a solid SOAD release.

One of SOAD's most defining characteristics was the trade-off, duel vocals between Malakian and main vocalist Serj Tankian. Malakian's vocals progressively moved closer to the forefront deeper into SOAD's career, but as formidable as his singing capabilities are, they were always secondary to the virtuosity of Tankian. One can't help but listen to "Dictator" and wonder what it would have sounded like with Tankian's involvement. There is an inescapable sense of emptiness due to Tankian's absence, similar to the way that VAN HALEN's 2012 album, "A Different Kind Of Truth", suffered considerably due to the absence of the backing vocals of original bassist Michael Anthony. Again, Malakian is a great singer and his performance on "Dictator" is excellent, but the vocal department is just not as fulfilling as it could be because of the lack of interplay between him and Tankian that is inevitably longed for. Make no mistake about it, "Dictator" is a good album, but it is essentially a diluted version of SOAD. With that said, it just might be enough to satiate SOAD fans until that band's next release—if it ever does come, that is.