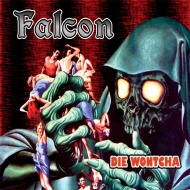 Time and distance are conspiring against retro-rockers FALCON, and not just in the usual sense that they'd be on a major label if the year was 1974. After the release of their self-titled debut, mainman Perry Grayson (ARTISAN, DESTINY'S END) wound up moving to Australia, leaving bassist Greg Lindstrom (ex-CIRITH UNGOL) on the west coast of the United States and drummer Darin McCloskey (PALE DIVINE) in the east. But these guys are nothing if not hard-headed fighters, and FALCON plans to remain an active band despite being scattered to the four winds.

And with the belated release of "Die Wontcha" (best title ever, a play on WEST, BRUCE & LAING's "Why Dontcha"),FALCON proves that the power of '70s-inspired riffing and true rock and roll won't be constrained by borders or oceans. Right off the bat, a few things become evident, mainly Grayson's love of and influence from classic THIN LIZZY licks. Lindstrom and McCloskey provide a loose, laconic groove to back the guitar shamble, giving the whole thing a very heavy-lidded, last-call kind of vibe. This goes well beyond the retro-pastiche of most stoner rock, and into some kind of ganjafied time warp where these guys really ARE recording in 1974, and somehow smuggling the analog results back here to wow a world full of ears harshed on digital sterility. It's a dank, dirty, bedenimed vibe, sparse and gritty, melodic and greasy with just enough fuzzed-out crunge to make it stick.

Grayson's vocals are the weak link, most often; while they suit the music in some cases, they're often merely placeholders for the moments between fantastical solos and thundering rhythm breakdowns, and occasionally (see "Corporate Whore" and "Careless"),they add an amateur glare to the proceedings. Most times they're harmless, like I said, but one wonders at the heights this record could attain with a real leather-lunged frontman at the mic and Grayson freed up to weave his guitar alchemy.

And it's his guitar that's the obvious star of the show here, his riffs ear-friendly and groovin', his solos liquid and emotional. The best moments on "Die Wontcha" are when the band can stretch out and just jam — see instrumental "The Wreck of the John Deere" or the several vocal-less parts toward the end of "Careless". For a band who don't get together often, they occasionally pull it off like they spend hours a day in the same room, feeding off each others' subliminal signals — a testament to the individual mojo of all three players.

"Die Wontcha" is not without its flaws and occasional rough patches, but these guys are clearly on to something, and their ferocious devotion to all things bell-bottomed and tube-amped puts them over the top on sheer heart alone. FALCON is a must for any self-respecting stoner rock or classic rock fan, the textbook definition of "born too late" and a model for anyone trying to follow their muse under adverse circumstances. Fans of early SABBATH and PENTAGRAM, you've got your marching orders.