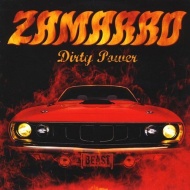 Americans notoriously mix up Sweden and Switzerland, but in at least this one case, you could forgive a stoner rock fan some confusion. While Sweden has cranked out a truly legendary batch of riff-driven, fuzz-happy bands, the Swiss scene remains far less known (quick, raise your hands if you've heard of THE TOENAILS... anyone?). ZAMARRO earned a little bit of notoriety earlier this decade solely for having the ambition to travel to the USA and record their first two discs with noted grunge-man Jack Endino. They've gigged alongside the right people (WOLFMOTHER, DANKO JONES, FU MANCHU),too — so why hasn't 99.9% of the world heard of them?

Well, taking four years off probably didn't help matters — but make no mistake, ZAMARRO has roared back from the dead on "Dirty Power". Fusing the straightforward riffgasm of FU MANCHU with some of the sly pop sensibility of THE HELLACOPTERS, and a little bit of ersatz muscle-car kitsch, the power trio kicks out some fun verse-chorus-verse hard rock anthems with a nice mix between metal riffing and pop dazzle. They're clearly writing for an arena that exists only in their heads, but there's nothing wrong with that — the world still needs bands in basements penning songs about how they're rocking faces and moistening panties by the stadium-load.

The band has a pretty limited palette, and a fairly flat vocal range (despite a few nice harmonies here and there),so by the end of "Dirty Power", the energy level starts to dissipate a little bit. But when they're on, cranking out heartfelt and hard-driving songs like "Now!" and the surprisingly smooth and lush "Alaska", ZAMARRO could turn the head of any fan of the Swiss — or Swedish — stoner scene. If you want simple riffs, hard grooves, melodic vocals and big choruses, ZAMARRO should hit you right in the pewter belt buckle and leave a lasting impression. They're not a great band, but they're a damn good one, and they got a lotta heart.