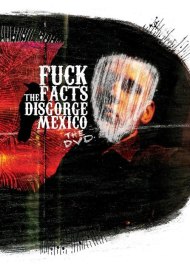 You enjoyed the rough synaptic treatment of FUCK THE FACTS' 2008 release "Disgorge Mexico" (Relapse),reveling in the neural abrasiveness and inventive grindcore psychosis. Now witness "Disgorge Mexico: The DVD", which captures the band performing the album in its entirety on stage at Le Petit Chicago (Hull, Quebec) during the "Live Disgorge" chapter and offers those with a taste for the brilliantly bizarre a film from David Hall called "Disgorge Mexico: The Movie".

In keeping with the caustic Canadians' left-of-sane ethos, even "Live Disgorge" is much more than just a straight concert film. Grainy, black and white shots, a host of brain bending effects and camera angles, and a series of other eclectic segments pepper the feature. That the stage presence of diminutive throat Melanie Mongeon is rabidly active is no big surprise for anyone familiar with her aggressive tactics. The band is tight, the sound quality is strong, and the performance of the album is flame-engulfing and as offbeat as the effects.

But lord have mercy, Hall's "Disgorge Mexico: The Movie" is like viewing a bad acid trip from the mezzanine seats of the charred remains of a liberal user's brain. Hall describes it as a "substance abuse art house riff on the destructive and volatile nature of love" and "a violent, hallucinatory depiction of one woman's strange journey" that is made even more addling by FUCK THE FACTS' musical accompaniment. I couldn't even begin to delve into the details with any semblance of linearity and logical assessment. Suffice it say, watching it will leave you permanently altered. I wouldn't recommend eating anything during the viewing either.

I find myself even more impressed now with the work of FUCK THE FACTS than I was when I reviewed "Stigmata High-Five" and "Disgorge Mexico", an indication of that uptick in appreciation perhaps evident from a recent review of "The Unnamed EP". The music of the Quebec terror tribe is destined to be judged by historical standards as one of the most talented and uncommon acts in metal. Limited to 500 copies of which 100 include a bonus DVD of live actions and behind the scenes footage, you best get to ordering "Disgorge Mexico: the DVD" as soon as possible. Up your meds before you do.