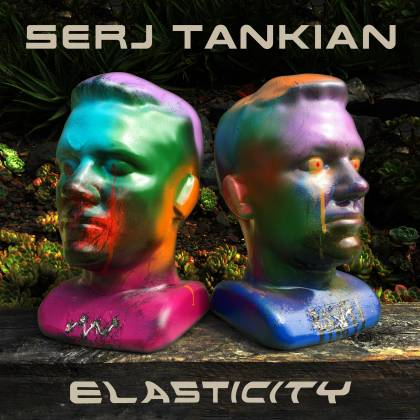 "Elasticity", Serj Tankian's fifth solo release and his first since 2013's solo full-length "Orca", is a batch of songs that Tankian had originally planned to release with SYSTEM OF A DOWN. Never idle, not by any means, he is constantly immersed in a variety of endeavors including musical collaborations, painting, composing music for film and perpetually engaging in activism. That politically conscious mindset, which has always been threaded through SYSTEM OF A DOWN's music, overtly presents itself here on the new EP, particularly on "Electric Yerevan", a song that champions his beloved homeland, which has and continues to endure hardship and conflict.

This EP is, as we would expect, tremendously eclectic. The title track is augmented by electronic pulses throughout, and the uplifting, hook-laden song is driven by Serj's quick, impassioned vibrato, which rolls off his tongue, as well as his equally characteristic, frantic carnivalesque delivery. "Your Mom", meanwhile, juxtaposes hefty humanitarian concerns with the song's spastic, jovial, bubble gum bounce, which clearly sounds like SYSTEM OF A DOWN circa 2021. "Rumi" is a calming, loving song Serj wrote both about his son Rumi and Rumi the poet, which only takes on a full-frontal hard rocking charge during the chorus, and "How Many Times?" is a piano-driven song that's even more relaxed with sparse heavy guitar work slightly resembling heavy metal from the eighties.

Serj Tankian is an incredibly talented and brilliant creative force who is the subject of the new documentary "Truth To Power", which is an overview of his journey through music and activism. He has played hopscotch across various art forms and musical genres, and his presence in the worlds of rock and metal have been sorely missed. SYSTEM OF A DOWN fans may be disheartened that last year's two tracks aren't a precursor of more to come in the immediate time frame, but they have reason to rejoice with SERJ TANKIAN's "Elasticity". The release may not be neck-and-neck with the best that SYSTEM OF A DOWN had to offer, but it's the next best thing. And it ain't bad at all.