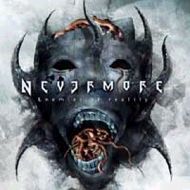 Both hail from the state that gave us the space needle, an exceptionally high suicide rate and the origins of a threadbare pullover-sporting, poodle rocker-scorning musical movement (grunge) — but Seattle citizens NEVERMORE and QUEENSRŸCHE would not have been mentioned in the same breath a few years back.

At a time when Geoff Tate's latter mob were still arguably on a high, vocalist Warrel Dane's NEVERMORE were emerging uncertainly from the shattered remnants of a major label nightmare (under their previous moniker SANCTUARY) after churning out passable no-frills metal. In a gradual turnaround, however, whilst QUEENSRŸCHE now appear to be languishing at the bottom of one of Seattle's bays following a succession of desperately lame albums, NEVERMORE have gradually whipped up a veritable tidal wave with their brand of intelligent-but-harsh hybrid metal in the space of six albums.

Oddly enough, none other than Kelly Gray — QUEENSRŸCHE producer and, briefly, guitarist — has overseen "Enemies Of Reality" at the mixing desk. And judging by the impressive sonic results, it's a mystery how he managed such a botch job on the 'RŸCHE in the first place. "Enemies Of Reality" is an astounding assault on the ears — a cavalcade of downtuned guitars and oppressive rhythms. It can be "modern" in its pummelling attack (the rapid fire opening title track) without losing the notion of several classic metal formulas. When NEVERMORE flirt around the fringes of power balladry, for one, the emphasis in certainly on the power part of the equation, as the awesome "Tomorrow Turned Into Yesterday" shows.

Above all, NEVERMORE are attaining the feel of a supremely confident band. And deservedly so. Where once it may have wavered, Warrel Dane's voice is near unbreakable. Similarly, as a rhythm section, Jim Sheppard (bass) and Van Williams (drums) hit home like a steamhammer. And do we need to burble on about Jeff Loomis's guitars any further?