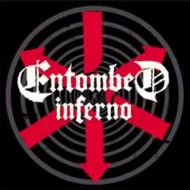 Something to light up your hi-fi? If the variable quality of their recent catalogue is anything to go by, then you can really only expect something that flickers at best from the grimacing Swedes — more of a mild conflagration than an inferno in your CD tray.

ENTOMBED used to be SUCH a great death metal band that when they evolved into a format that quickly became touted as "death 'n' roll" — that they, to give them their dues, spearheaded — it didn't take too long for things to turn decidedly sour. 1996's "DCLXVI - To Ride, Shoot Straight and Speak the Truth" was a worthy, and suitably grubby, full introduction to this rock 'n' roll-tinged attack, but later when their riffing fingers stared to itch even more and 1998's "Same Difference" hit the racks, you were left wondering how the same band who once roared like a salvo of cannons could even contemplate working mellower sounds into the mix. It was almost heresy.

Since that fateful album, the band has gone to great lengths to repair the damage. But, as the old saying goes, things are never quite as good second time around — and certainly not where 2001's "Morning Star" was concerned. It was meant to be an increasing return to form after promising predecessor "Uprising", but the songs shambled under the weight of their own fuzz. Have ENTOMBED got anything left in their arsenal after that, you begin to wonder?

Rather disconcertingly, the first thing you notice about "Inferno" — their third attempt at reinventing their steel — is that they have a song entitled "That's When I Became A Satanist". Whilst the band is noted for its sense of humor, this is probably an obvious parody too far — and the song itself ain't no great shakes, either.

Nevertheless, overall "Inferno" cranks out more effectively than its below-par predecessor. But that, to be fair wouldn't be too difficult, and if you take away the two songs that truly could be considered exceptional (the warped "Incinerator" and monstrous CELTIC FROST-esque grind of closer "Night For Day"),there are still eleven more that could do better. Of these, the traditionally-minded "Young & Dead" and "Public Burning" fare well by their very gut-wrenching, speedy nature, whilst the rest are, to varying degrees, merely likable, listenable, passable and acceptable — but rarely fist-clenchingly lovable.

There's still a great band buried in there somewhere, but you feel it would take a hulking great flamethrower to fully light up their creative spark once more.