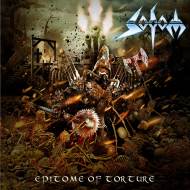 Of all the death metal and thrash giants who have faced more trials on a charred path filled with scrutiny and ill-fated personnel, it has to be SODOM. Inherently, death metal is a form of protest music depending on the latitude of intelligence its practitioners push into their work. "Agent Orange" put SODOM on the map for its ingenuity and courageous subgenre morphing. However, the more critical facet to that album is the deciding course of action Tom Angelripper and his SODOM horde would steer towards. The band has become less about the arcane from its "Obsessed by Cruelty" days and more of a cacophonous vehicle against war.

SODOM has spun within a ball of confusion at times sound-wise of the years, but at the core, the group has presented an appreciable dichotomy of churning ugliness and intrinsic hope. Having wrongly been accused of fascism, reason has now shed the light and on their latest album, "Epitome of Torture", SODOM remains honor-bound as ever to tee off against the horrors of war and political nihilism.

Fortunately for speed freaks, "Epitome of Torture" stays primarily in thrash mode with random variances in tempo. Having lost previous drummer Bobby Schottkowski due to reported in-house "personal and private problems," the band soldiers on with new slammer Markus "Makka" Freiwald and loses no ounce of momentum.

If anything, "Epitome of Torture" carries a settled, gusty feeling to it. The album rages, but it's so finessed and perfected from years of experience between Angelripper and guitarist Bernd "Bernemann" Kost, it's not so much a routine for these guys. "Epitome of Torture" is the sound of veterans who know when to punch in and make the short-termed but hours-intensive shifts count.

Though the album settles down at the end on the mid-tempo whumps of "Into the Skies of War" and "Tracing the Victim", the majority of "Epitome of Torture" is set upon a blitz as SODOM continues to reflect mankind's atrocities within their fractured mirror of accusation. The first four tracks are full of relentless velocity, which will delight purists. "Stigmatized" is especially nasty, calling up the dark and gritty "Persecution Mania" years as Tom Angelripper (who has an unabashed vocal resemblance to Tom Araya most times) dips his vocals back into the Stygian mists of the band's early days. Likewise, "Shoot Today Kill Tomorrow" keeps the old-school flavor rolling with rambling choruses to break up the whirling mayhem.

"CANNIBAL1" scales things back to a medium pace, as does "Invokating the Demons", but expect the blood-flinging to ensue on "Katjuschka", a song about a Russian rocket launcher that's been in production since World War II and is, according to Angelripper, "responsible for the death of more people than Stalin's organ."

Bernemann continues to shred with precision and his solos are as spectacular as expected. He makes listeners forget the goofy title of "S.O.D.O.M." with one of the most breathtaking solos he's ever laid down. It helps matters the cut is blazing fast to begin with. For all the parting and death Angelripper has had to stomach over the years in SODOM, Bernemann continues to be a blessing and he seldom gets the credit he's due.

Nonetheless, "Epitome of Torture" is just about by-the-numbers for SODOM's purposes. Best of all, it carries a thought-provoking state of conscience that adds to the true legacy of a band once notoriously remembered for Lucifer odes and sex-heavy cover art ("Mortal Way of Live") banned throughout the world.