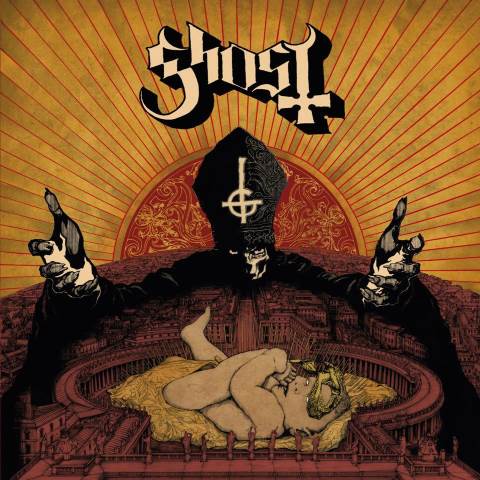 Try to recall a time before GHOST B.C. became an overhyped gimmick of a band, more visual than musical; back when their initially overlooked debut, "Opus Eponymous", began turning heads based solely on its novel attempt to harness fundamental metallic songwriting devices and undiluted satanic themes to uncommonly poppy, downright "soft rock" sounds.

Can't do it? Same here, but this exercise is nonetheless necessary if one is to honestly consider the (mostly) anonymous, ever-Halloween-ready Swedish sextet's sophomore album, "Infestissumam", with any semblance of musical clarity, amidst the disorienting visual din and overwhelming hype surrounding its release.

With that goal in mind, we can affirm that the key differential in store for returning listeners is that, while "Opus Eponymous" possessed a very consistent vision despite its unconventional approach, "Infestissumam" suffers from a bit of bipolar disorder - tearing it between safely staying the course and treading new ground.

Yes, even more "conservative" new material like "Per Aspera Ad Inferi", "Year Zero" and the rather majestic "Depth of Satan's Eyes" escalate the role of keyboards versus guitars in the overall mix, but their basic frameworks vary almost imperceptibly from the first album's astoundingly successful merger of MERCYFUL FATE, BLUE OYSTER CULT, and, I dunno, THE CARPENTERS!

Like the album's controversial early single, "Secular Haze", these songs' only MAJOR sin is lacking in the comparably irresistible hooks of their predecessors; and this shortage of inspiration may ironically also explain the somewhat forced need to experiment revealed by "Infestissumam"'s other tracks.

These include the unnervingly bouncy skip of "Jigolo Har Megido", the lackadaisical "occult MOR" expressed by "Body and Soul", THE BEATLES-esque corruptions of "Idolatrine", and the almost hymnal qualities of "Monstrance Clock" - but also the seven-minute ambition of "Ghuleh / Zombie Queen", which queerly evolves from minimalist, gently murmured, piano-assisted funeral march to honest-to-goodness surf rock (!!!),before finally reverting to the organ-and-choir-backed black mass vibe sprinkled throughout, beginning with the introductory title cut.

So whether one deems it a deplorable piss-take on heavy metal (the ABBA cover as bonus cut is certainly indefensible as anything BUT calculated shock value) or earnest veneration of the art form at its most radically contradictory, the reality is never before have musical entreaties to Lucifer and his court sounded this heavenly sweet or upbeat.

Until GHOST B.C.'s eventual third album sees them collaborating with AIR SUPPLY, that is.

For now, like "Pet Sounds"-period BEACH BOYS gone metal, GHOST B.C. seemingly attempted to (paraphrasing Brian Wilson) "compose a teenage symphony to Satan"; and whether the master digs the sugary concoction or not, no other band has tried this angle before.

Now, only time will tell whether GHOST B.C. will convert more new disciples than alienate the old with the musical evolutions carried out on "Infestissuman", but we're ready to wager they'll survive and even thrive regardless, based solely on their visual stunt, like SLIPKNOT and KISS (which, don't forget, has successfully camouflaged pop music with heavy rock iconography for years) before them. behind this gimmick) before them.

Better get used to 'em?