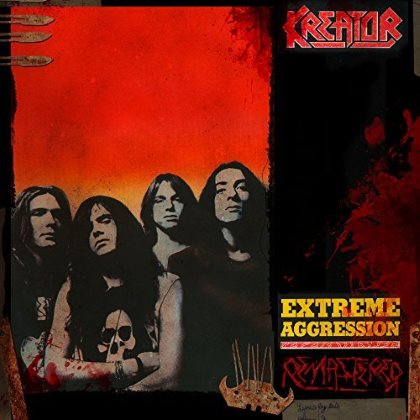 Everyone following KREATOR over the band's 35-year course has their favorite album, and it's not necessarily a unified choice. Poll 10 fans at once, you'll probably hit upon most of the group's 14 LPs to-date, minus the troubled experimental albums spanning from 1992's "Renewal" through 1999's "Endorama". Then again, there are defensive fans of those, though you're more wont to see people bickering about the merits of "Pleasure to Kill" over "Coma of Souls" and vice versa.

What most thrash hounds can agree upon is that KREATOR's 1989 "Extreme Aggression" remains a genre masterpiece. Though the band, and some fans, cite it as flawed, "Terrible Certainty" is another KREATOR hallmark, if for nothing else, pushing thrash into a more expressive territory. Yet "Extreme Aggression" remains its superior in terms of songwriting and most certainly production. Here was an album that took a clunky and brutal German juggernaut and refined it into a thrash powerhouse, one capable—along with DESTRUCTION, SODOM and HELLOWEEN—of challenging, if not dethroning, its San Francisco-based American counterparts.

As the video for "Toxic Trace" introduced KREATOR to most American metalheads via "Headbangers Ball", once "Extreme Aggression"'s "Betrayer" clip hit MTV, the band's future was veritably written. Anyone who was a Saturday night "Headbangers Ball" disciple back in the day will tell you it was worth stomaching repetitious plays of WARRANT and its poofy ilk just to get to the interim real metal video by MANOWAR, KING DIAMOND, OVERKILL, PRONG, ANTHRAX and, of course, KREATOR.

For those whose first exposure to KREATOR came in the way of "Extreme Aggression", it was a hell of a jumping on moment as Mille Petrozza, Rob Fioretti, Jurgen"Ventor"Reil and Jorg"Tritze"Trzebiatowski—who bowed out of the recording process, saving his licks for the stage instead—propagated a global phenomenon. The progressions, random slowdowns and sharpened musicality pushed "Extreme Aggression" into the receptive paws of the metal public. Released throughout Europe by the famed Noise Records, "Extreme Aggression" attracted the likes of Epic Records, who partnered up and brought the album to America.

Though "Coma of Souls" marks KREATOR's first true major-label outing, "Extreme Aggression" prior to was given the royal treatment by Epic, who saw the promise beyond "Betrayer" and the title track, which still today remain staple live cuts. The album is both leaner yet more muscular than its predecessors, tighter instead of choppy, powerful instead of blunt. "No Reason to Exist", "Don't Trust" and "Love Us or Hate Us" are three of KREATOR's most sardonic songs in the group's entire catalog, and there have been many. The tinkering transitions between thrash, death metal and power metal were revolutionary. KREATOR's new order of songwriting tested true on "Terrible Certainty" by dropping sensible signature shifts and innovative arrangements over music that was still as fast as previous releases, "Endless Pain" and "Pleasure to Kill", yet stuffed with then implausible harmony.

"Some Pain Will Last", another trusty weapon in the band's live arsenal, made use of a militant march capped by cataclysmic riffs, while "Don't Trust" had as much groove as mosh going for it with bobbing chords that rocked out with far more glee than, say, "Death Is Your Saviour". Yet there's still the two-minute bombardment of "Bringer of Torture" plus "No Reason to Exist" and "Stream of Consciousness"—carrying some of the fastest passages, along with "Betrayer", on this album—to satisfy the speed freaks. The key to it all was sophistication versus sheer malice.

For 2017, Noise Records, after launching a massive "Best of" campaign a year ago, is on a reissue frenzy, beginning with CELTIC FROST, VOIVOD and, of course, KREATOR. In the latter case, Noise has remastered "Endless Pain", "Pleasure to Kill", "Terrible Certainty" and "Extreme Aggression", along with the EPs "Flag of Hate" and "Out of the Darkness... Into the Light" plus the "Blitzkrieg" and "End of the World" demos scattered throughout. In the case of "Extreme Aggression", a wonderfully preserved 1990 show in East Berlin serves as a bonus feature.

Inside "Extreme Aggression"'s remaster package is liner notes from Malcolm Dome, who illustrates the band's sometimes-neurotic recording foibles, ranging from location issues to poor drumming capture to Tritze's discomfort in studio, which prompted the performances to be dropped as a trio. As ever, the behind-the-scenes narrative presents an entirely unique perspective to a widely acknowledged classic. As if anyone was thinking how strange it must've been for the band members to record in avant garde maestros TANGERINE DREAM's space while grinding their neck muscles to "Betrayer". In a strange way, there was a rub-off effect that inadvertently made this album as perfect as anything Mille Petrozza has highlighted on his resume.