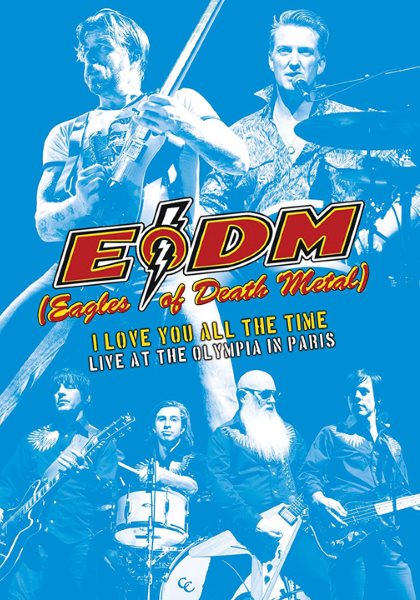 I Love You All the Time: Live at The Olympia in Paris

Globally and repeatedly the music world has felt the effects of terrorism and how easily it can strike. Whether you're referring to the onstage assassination of Dimebag Darrell, plus four other casualties, at the Alrosa Villa in Columbus, Ohio or, on a larger scale, the terrifying loss of 22 people at an Ariana Grande concert in Manchester, England. Instantly, a night out to enjoy live music can turn ugly. When EAGLES OF DEATH METAL played Paris's Bataclan on November 13, 2015, the unspeakable happened: 89 Parisian fans were slain in a coordinated set of terrorist attacks around the city, for which ISIS claimed responsibility. The death toll didn't stop there.

Jesse Hughes was shaken to such lengths he committed a faux pas resulting in his and Josh Homme's ejections by the Bataclan at a later memorial concert. He had claimed that the bombing was likely an inside job, indirectly pointing out Muslim staff at the Bataclan. Hughes later retracted and apologized for these remarks. In February of 2016, however, he and the EAGLES OF DEATH METAL returned to Paris to finish the concert they began, this time staged at L'Olympia Bruno Coquatrix.

However you construe Jesse Hughes's reactions, undeniably stress played into it. Hughes was still wearing it upon the band's revisit to Paris, make no mistake. If anyone took the most responsibility that February 16th at the Olympia, it's Hughes. Fear soon gave way to determination and ultimately relief in a driven performance by EAGLES OF DEATH METAL, resulting in a curtain call for the ages, and a healing touchstone for band and fans alike.

"I Love You All the Time: Live at The Olympia in Paris" captures the entire makeup show with Hughes and Homme backed up by guitarist Dave Catching, bassist Matt McJunkins and second drummer Julian Dorio, along with a keyboard appearance by Tuesday Cross and guest guitarist Eden Galindo. Jesse Hughes takes the stage in a worn king's robe, and his nervousness is palpable from the get-go. He takes a few minutes to confront his trepidation and show reverence to the howling French crowd before the band staggers into "I Only Want You". They pause for a minute of silence in the middle of the song, but otherwise seize the opportunity to glorify rock 'n' roll, not the violence culminating in this moment.

Josh Homme taps out a lead into "Don't Speak (I Came to Make a Bang!) " as a fan throws a T-shirt bearing "I Wannabe in Paris" (a tweak of EAGLES OF DEATH METAL's "I Wannabe in L.A. "),and Jesse Hughes immediately drapes it for display overtop one of the amps. Despite his game knee knocking and groin slogging for the first few songs in the set, Hughes is beyond tense until the band hits "Whorehoppin' (Shit, Goddamn) ", where his unchained profanity sets him in his element and ultimately sets him free. "I Love You All the Time" thereafter is a bit messy, but by this time, second drummer Julian Doro (QUEENS OF THE STONE AGE) is on the kit next to Homme and the band really clicks.

Jesse Hughes, who often sings like a garage-bred, boner-stuck David Byrne, lets his inner geek begin to radiate as the show grinds along. EAGLES OF DEATH METAL being an intentionally dweeby haul of sex-driven sweat rock, the band gives Hughes the amplified maneuvers for him to swivel, shake, slither and dance foolishly to his nerdy content. While the beard-blitzed Dave Catching, a worthy sidearm to Hughes and a terrific fret slider, grabs most of the solos, it's Hughes's dorky will to show off with screechy behind-the-head shredding that the crowd dials into.

The escalating jovialness of the show catches on with Julian Dorio, who hilariously kicks back with his feet propped upon his snare, reading a magazine while Josh Homme alone fields "Miss Alissa". Tuesday Cross later crowd surfs. The band takes down a geeked-out grit rawk version of DURAN DURAN's "Save a Prayer". The Olympia audience whoa-ohs to it all as Jesse Hughes jokingly threatens to steal their appreciative melody for a future song.

"Cherry Cola", "The Reverend", "So Easy", "Secret Plans", "I Got a Feelin' (Just Nineteen) " and of course "I Want You So Hard (Boy's Bad News) " are played with varying degrees of intensity, ranging from laidback to full-frontal assault. They playfully tinker with a STEALERS WHEEL cover, modifying it to "Stuck in the Metal", from the original "Stuck in the Middle with You". The cathartic moment of the entire performance, however, comes in the finale during "Speaking in Tongues", where Jesse Hughes disappears from the stage, leaving the band to jam awkwardly until he manifests in the balcony amidst the fans. Knowing this is a moment of magic in the making, Dave Catching blows Hughes a sentimental, brotherly kiss as the duo rip together across stories high.

Josh Homme engulfs his emotional partner at show's end in a touching embrace, having successfully faced the proverbial fire, extinguishing it in the name of rock on behalf of the souls departed mere months prior. Glorious, to say the least, and likely to remain the pinnacle moment in this band's otherwise goofy history.