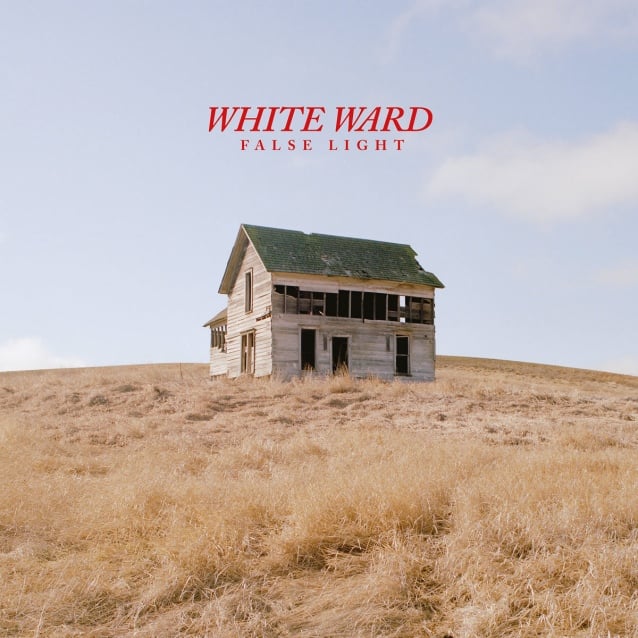 Avant-garde experimentalists to their twisted core, WHITE WARD regard black metal as a vehicle, one that will transport the Ukrainians wherever they damn well please. "False Light" contains plenty of the frostbitten good stuff, of course: opener "Leviathan" is at least 50 percent bombast and extremity echoing the heaviest moments of previous albums "Futility Report" and "Love Exchange Failure".

But what always happens when this ingenious band unveil a new body of work is the eventual dismantling and rebuilding of every anticipated cliché. "Leviathan" is a 13-minute extravaganza, showcasing the dynamic extremes of WHITE WARD's uniquely weird sonic vision. The initial storm of blistering blastbeats dissolves into an anaesthetizing wash of post-everything ooze, with a mellifluous horn solo drifting up into the nocturnal haze. The riffs kick back in, accompanied by sonorous sax and frontman (and bassist) Andrey Pechatkin's coruscating screech, before another onslaught of gleeful violence and a haunting fade to black.

The rest of "False Light" follows no conventional pattern and rarely does the expected, and yet the overall effect is to enshroud the listener in a reassuring cocoon of weirdness. With tangential shades of BOHREN AND DER CLUB OF GORE and Angelo Badalamenti's "Twin Peaks" soundtracks, songs like the sleepwalker's waltz of "Salt Paradise" (again, embellished with a wonderful horn solo) offer no musical connection to black metal whatsoever, which is the kind of avowedly non-conformist thing that black metal bands probably should be doing. The same applies to the sleazy jazz undertones that are woven seamlessly into a fiery monolith to the frozen north like "Phoenix", a song that also, audaciously, assimilates dark synth pop into its bewitching brew. "Silence Circles" begins as a treacly, atmospheric wall of sound, before exploding into cascading waves of blackened pomp; "Echoes In Eternity" is soulful ghost jazz fed through faulty electrics.

Even at their most aggressive, WHITE WARD are incapable of toeing the line. "Cronus" is a barbaric, unrelenting thing, book-ended by jittery, Michael Gira-esque post-punk and mournful, sax-augmented doom. The first five minutes of the title track are also admirably vicious, while the song's eerie, out-of-focus coda sounds beamed in from another realm. As its last breath fades away, "False Light" leaves trace memories and lasting resonances, like a surreal nightmare that skims too close to reality. Meanwhile, closing fever dream "Downfall" marries minimalist piano and swathes of reverb with some unbearably poignant spoken word. In troubled times for their home nation, WHITE WARD are conjuring dark and daring art with a perverse but poetic soul. More power to their noble and fearless vision.